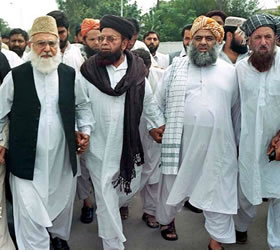 Khyber-Pakhtunkhwa administration has demanded of the health, education and other departments to submit a list of such government employees as have been absenting themselves from their place of duty for a long time and are said to have been gainfully employed in different foreign countries.

The provincial government is initially serving notices on more than 50 officials whom the former administration of Muttahida Majlis-i-Amal (MMA) allowed to go abroad on deputation or granted them long leave for the purpose. If these employees refuse to respond or return, the government may serve show-cause notices on them telling them to explain why their services should not be terminated. There are several cases in which influential persons with right connections have obtained no-objection certificates and flown out of the country to graze on greener pastures.

The legal position back home is that the government can neither force them to return with immediate effect nor recruit new candidates in their place. In this way many posts continue to remain vacant and unfilled thus causing unnecessary delay in routine office work.

Knowingly or unknowingly, the trend has given rise to an environment that has liberally been promoting the culture of ad hocism in vital offices. In nine out of 10 cases, the employees who have been temporarily officiating for others do not necessarily have the required sense of responsibility in their day-to-day public dealings and tend to put their signatures on office files as stop-gap arrangement without being sure of what is going to happen tomorrow.

It is indeed strange that the government has allowed this trend to continue for more than three years. The process of issuing show-cause notices should be accelerated so that those not interested in their jobs at home should be shunted out and replaced by other deserving candidates. -Statesman