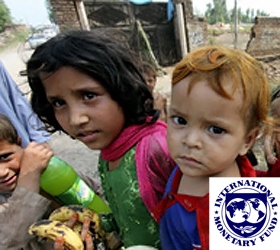 EDITORIAL (September 06 2010): The response of the multilateral institutions to the flood calamity in Pakistan is very positive. They are not only prepared to continue their existing programmes, but are also quite willing to extend assistance on a fast track basis under other facilities.

According to an announcement by Strauss-Kahn, Managing Director of the IMF, on 2nd September, 2010, the Fund would provide around dollar 450 million in immediate emergency financing to Pakistan to help the country manage the aftermath of the massive and devastating floods that wreaked havoc in the country, besides working towards the completion of the Stand-By Arrangement (SBA) Programme Review.

Talking about the devastation, Strauss-Kahn added that “the floods in Pakistan are first and foremost, a human tragedy still affecting millions of people. But this natural disaster will also have an important effect on the country’s economy as it has caused serious damage to the infrastructure, severely impacted the economic outlook and resulted in a worsening of the fiscal situation.” The emergency assistance, which is likely to be made available this month after the approval of the Executive Board, would be provided under the Fund’s policy for Emergency Natural Disaster Assistance (ENDA) and would be on top of the amount to be disbursed under the current SBA in place since November, 2008.

Dialogue on the SBA was also in progress concurrently and completion of the fifth review would allow the Fund to disburse an additional dollar 1.7 billion. Managing Director of the IMF indicated very clearly that Pakistan, in turn, had pledged to continue the reforms. His statement was confirmed by Finance Minister, Hafeez Shaikh who said that “Pakistan remains committed to the reform efforts that will put public finances on a sustainable basis and lay the foundations for growth.”

The World Bank also followed the lead given by the IMF. It added dollar 100 million to dollar 900 million already committed to help the country in financing immediate recovery needs and longer-term reconstruction. The money will come from the bank’s fund for the poorest countries, the International Development Association, which means that the loans are concessional and carry no interest payments. World Bank’s President, Zoellick also repeated the same sentiment by saying that “we need to respond strongly to the crisis at hand, but we need to do it without losing sight of important economic reforms.”

Prompt response of the multilateral institutions to help Pakistan at this critical juncture is undoubtedly very encouraging and reflects a very sympathetic attitude of the international community to our plight. With the scale of devastation experienced by the country, Pakistan would have found itself in more dire straits in the absence of the generous flow of assistance from a variety of outside sources.

Although the negative impact of the floods on various macroeconomic indicators of the economy is yet to be finalised it is clear that the net effect in terms of variables like decline in GDP, drop in exports, rise in imports, erosion of foreign exchange reserves, rise in inflation, and worsening of the budget deficit is not only going to be substantial this year, but likely to continue for a considerable length of period due to huge damage to infrastructure and displacement of large part of the country’s population. Liberal flow of assistance would lessen the severity of the negative impact in various areas and help the country in repairing the damage caused to the infrastructure, which would pave the way for recovery of the economy in a relatively short period of time.

However, we must not lose sight of the emphasis of the multilateral financial institutions to maintain the momentum of the reforms to rehabilitate the economy on a long-term basis. Foreign aid could ease the pain and provide short-term relief but is no substitute to domestic reform efforts needed to get out a difficult situation and move towards a sustainable growth trajectory. In fact, it would have been more honourable for the country to rely more on its own resources by reducing its consumption levels, rather than making fretful appeals to the international community to come to our rescue.

The dependency syndrome, to a large extent, is viewed negatively in the comity of nations and is not the proper way to move forward. Since Pakistan is now committed, under agreements with the multilateral institutions, to follow a certain reform agenda in exchange for the liberal assistance being provided to the country, the indicated path/performance criteria must be followed in letter and spirit to achieve the objectives of the programmes. Hopefully, the country, by following the prescribed reforms, would be able to overcome the present difficulties and improve its economic outlook over time. The immediate test case, in this connection, would be the intensity of efforts and the degree of success in mobilising higher level of revenues and cutting government expenditures to meet the huge financing needs of the economy – Brecorder