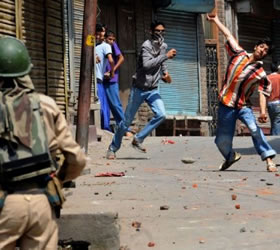 A report in the Wall Street Journal says that if the Indian government does not move on the Kashmiri protests to give the Kashmiri people the right of self-determination, the current wave of protests would intensify after Eid. Eid is due in less than a week, and the threat is held out by Masarat Alam Bhat, who was interviewed by the Journal when he made this threat. He is the person who has been behind the current protests, which the Indian security forces have tried to suppress with their typical brutality and violence, which have led to the killing of over 60 since June 11. The interview is evidence that the international community can no longer continue ignoring the Indian brutality there, and the deaths that are occurring as a result.
India should see the writing on the wall, and move towards the UN-supervised plebiscite it itself had agreed to in the shape of the relevant UN Security Council resolutions. This is the demand expressed by Mr Bhat, and is the one India should now agree to concede, as its illegal occupation cannot continue. This is also the time when Pakistan must be firm in its support of the Kashmiri cause, because its position as the USA’s ally in its war on terror will counterbalance India’s role as the power the USA is promoting as its regional policeman. US support for India’s illegal occupation must be weakened, and its silence over Indian oppression in the held Valley must be brought to an end.
Mr Bhat’s statements in favour of enforcing Islam will be taken out of context by the Indians, who will use them to play upon American fears of militancy, and to blur the line between a legitimate freedom struggle and terrorism. However, the world should not so much realise, as observe, that in Kashmir, it is the Indian state which is the terrorist, not those struggling against the occupation.
India must understand that just as every generation of Kashmiris will offer sacrifices to win freedom, it will also go on throwing up new leaders until the goal of freedom from Indian occupation is achieved – Nation