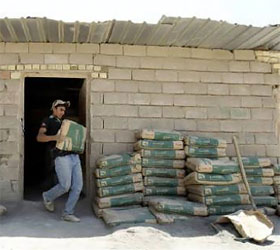 As the waters recede a semblance of order may emerge from the chaos. Putting Pakistan back together again is going to be the biggest repair job in our history, and some bits are going to get fixed quicker than others. With taxation a primary source of revenue, the government is mulling three proposals for the generation of an additional Rs130 billion. The corporate sector may find itself subject to a 10 per cent flood surcharge, there is the possible imposition of a 5-10 per cent surcharge on the taxes of those earning more than Rs300,000 per annum, and the one likely to be least popular is the idea of utilisation of the Rs20 billion collected as Workers Welfare Fund. The precedent for the imposition of a flood surcharge was set in 1971 and a final decision as to what forms of taxation are to be imposed will be made after completion of the Damage and Need Assessment by the World Bank and the Asian Development Bank.
The magnitude of that damage is almost beyond comprehension. In terms of standing crops lost the most recent valuation is Rs421.637 billion. Cotton, sugarcane and rice crops have been wiped out in some areas and some cotton mills have already closed. The leather industry (one of our successful exports) faces a bleak future because of the decimation of livestock in the flooded areas. The domestic poultry flock has also been hard hit. Aid and relief monies will not replace lost topsoil or farm animals and it is a moot point whether another crop will be sown and harvested in what is left of this year. On a slightly brighter note Thatta has been saved from complete devastation and the displaced population is beginning to return home. The danger is also receding in respect of other towns in the Indus outfall region. Rehabilitation has already begun in Khyber-Pakhtunkhwa with makeshift bridges being replaced by sturdier load-carrying structures, and with bridges comes traffic and with traffic comes trade. There remains a significant risk of malnutrition in coming months, and in the parts of the country which have cold winters – like KP – shelter remains a serious issue. Taxation, debt relief and soft loans are all going to play a part in putting us back together again; we are all going to have to pay the price of The Great Flood, 2010. And that includes those who have avoided paying taxes in the past – Thenews