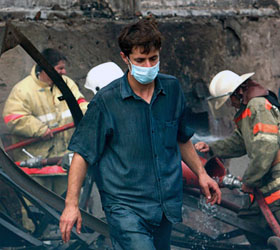 MOSCOW: A man blew himself up near a checkpoint in Russia’s Caucasus region of North Ossetia, killing one policeman and wounding two, an official in the region told media.

Officials said the suspected suicide bomber walked up to the checkpoint close to the administrative border with neighbouring Ingushetia and detonated his charge.

“This is the preliminary information,” said the duty officer at the police headquarters for the region’s Prigorodny district in the region where the blast took place.

North Ossetia lies to the north of the breakaway Georgian region of South Ossetia, recognised by Russia as independent after the 2008 war with Georgia over its status – Geo