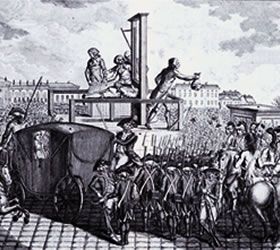 There were unsettling echoes of the French Revolution of 1789-99 as our cricketers were pelted with tomatoes as they left Lords cricket ground on Sunday. The common people of France pelted feudal aristocrats and corrupt priests with rotting fruit and vegetables as they were carried in the tumbrel to their appointment with Madame Guillotine.

Nobody is going to have the heads from our cricketers or their manager, but the image of a jeering, booing crowd, most of them Pakistanis, is going to endure. A clearer picture is beginning to emerge of where “our boys” might stand vis-a-vis British law.

The UK Gambling Act of 2005 states that anybody who cheats, attempts to cheat or assists another person to cheat at gambling is liable to be sentenced to a maximum of two years in prison as well as a fine of 5,000 pounds. One of our countrymen who played for Essex, Danish Kaneria, was arrested under this Act in May after a police investigation into betting irregularities. He is due in court on Sept 15. Additionally, charges may be brought under the Fraud Act of 2006–our cricketers may be in trouble beyond their worst imaginings.

Latest reports on Monday in The Independent state that large sums of money, far beyond the daily allowances paid to players, were found in the rooms of some players. If the numbers on the notes now found correspond with the numbers of the notes paid to the fixer by The News of the World, then matters begin to look very grave indeed.

Whether they are eventually charged or found guilty is in a sense immaterial. The damage is done, and we may see what is unfolding in the UK as a metaphor for Pakistan as a whole. Weak management, lack of self-control or moral values at an individual level, institutionalised corruption, a default response when confronted with unpleasant realities to lie or obfuscate–this is how the world sees us, and not just the cricketers. Not everybody is a cricket fan, but billions are fans of some sport or another.

And all sports have rules. The rules are there to maintain fair play and regulate the behaviour of those involved–not unlike a constitution or a body of civil law. Games are themselves microcosms of government. Some governments play fair, others don’t. If our cricketers are the yardstick by which we measure ourselves, then we as a nation would appear to have fixed our own side to lose.

In France, factors in the masses’ rising up were, poverty, starvation, resentment against feudal rule and the conspicuous consumption of the nobility, among others. Does this ring any bells? If not, then we may be in an even bigger mess than we thought we were.