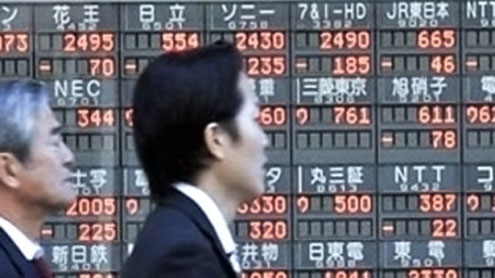 There are also hopes the US Federal Reserve will unveil its own drive to pump cash into the economy, while another batch of poor trade figures from China on Friday increased the likelihood Beijing will also intervene to kickstart growth.On Monday morning Japan released data showing its economy grew just 0.3 percent in April-June from the previous quarter, the fourth consecutive rise but a slower pace than before. The figures were significantly weaker than market expectations for a 0.7 percent increase, as exports slowed due to falling global demand, especially from the debt-wracked eurozone.

It also marked a sharp contrast from a brisk 1.3 percent increase in the January-March period. In afternoon forex trade the euro stood at $1.2277 and 96.10 yen, down from $1.2291 and 96.16 yen on Friday in New York.The dollar bought 78.28 yen, from 78.25.“There are increased hopes of further easing in response to the China data on Friday,” said Stan Shamu, market strategist at IG Markets in Melbourne. “This ramped up toward the close of the US (on Friday) and has filtered through to Asian trade,” he told Dow Jones Newswires. On Wall Street the Dow ended 0.32 percent higher, the S&P 500 added 0.22 percent and the Nasdaq edged up 0.07 percent.