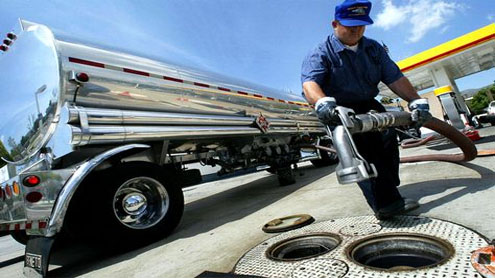 London: Oil dipped towards $120 on Monday as renewed worries about the eurozone triggered by Spanish debt problems and concerns about slower growth in China prompted a pull back in investor risk appetite.

Brent crude futures were down $1.16 to $120.05 a barrel by 1010 GMT, after earlier falling below the key $120 level and trading down to $119.59 a barrel.US crude was down 19 cents to $102.64 a barrel, off an intraday low of $101.86 a barrel. Spanish 10-year bond yields broke above the key six percent level as investors worried the country would not be able to keep its budget deficit in check. The rise in yields followed data on Friday that showed record borrowing by Spain’s banks from the ECB. As a result of the renewed worries about the eurozone, the euro came under pressure against the dollar, falling to two-month lows.

This helped the dollar rise 0.25 percent against a basket of currencies. A stronger dollar makes commodities priced in dollars more expensive for buyers using other currencies. Oil prices were also reflecting worries about reduced demand from China after data on Friday showed the economy growing at its slowest pace in nearly three years in the first quarter. China’s implied oil demand rose moderately in March over a year earlier, but stood at a five-month low on a daily basis, as refineries scaled back their runs to the lowest level since October due to maintenance and poor refining margins.

Reflecting the shift in sentiment, speculators cut their net long positions in US crude oil futures and options positions to the lowest level since December in the week to April 10, data from the US Commodity Futures Trading Commission showed on Friday. Oil at $120 a barrel is seen as a key technical support level for Brent because it is a former line of resistance that held almost all last summer before prices eventually punched higher into a new trading range this year. “We might fight with this strong support line for a couple of days, but if it breaks, prices could slip a bit further,” said Sommer. – Dailytimes