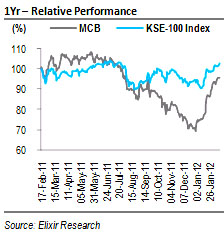 Growth in earning assets to drive NII growth: Growth in the bank’s average earning assets combined with higher yields in addition to PKR700mn of suspended markup income (following the conversion of power sector debt into PIBs) would be recorded during 4QCY11. As such NII shall grow by 17% YoY in 4QCY11 and 21% YoY for CY11. 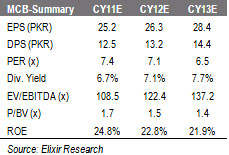 Investment Perspective: The bank is currently trading at CY12 PBV of 1.52x and poses an upside of 16% from present levels. Therefore, we maintain a BUY stance on the stock with Dec-12 target price of PKR216/share.

Growth in earning assets to drive surge in NII

Growth in the bank’s average earning assets by an expected 21% YoY combined with higher yields are expected to result in a 21% YoY increase in MCB’s net interest income (NII) during CY11. The bank is also expected to record PKR700mn of suspended markup income (following the release of circular debt PIBs) during 4QCY11 augmenting NII by 8% QoQ. 4QCY11 NII shall be up 17% YoY.

Advances have remained muted for the year for the entire sector. The same is true in case of MCB which is anticipated to see a slight (0.4%) decline in advances during CY11. Furthermore, provisions against non-performing loans (NPLs) will likely remain flat YoY at PKR3.1bn during CY11 as 90% of NPLs are classified in the ‘loss’ category substantially covered at 83%.

Strong non-fund based income to boost the bottom line

Non-funded income will likely see a growth of 29% YoY during CY11, despite growth likely slowing down to 21% YoY in 4QFY11. Surge in non-interest income shall be backed by a growth in fee income, FX transactions and dividend income. As such, CY11 PBT shall be up by a significant 24% YoY.

We expect MCB to continue leading the sector in terms of asset quality and NIMs. Trading at CY12E PBV of 1.52x, we continue to maintain a BUY on the stock with Dec-12 PT of PKR216/share.