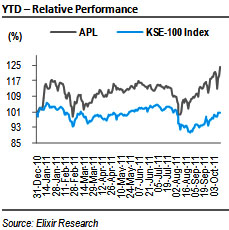 Margins per ton to decline by 11% YoY: APL’s realized margin on HSD at PKR0.84/liter remained 40% lower than normal margin of PKR1.39/liter during 1QFY12, which shall raze nearly PKR116mn from gross profit. With muted estimated inventory gains of PKR35mn, coupled with lesser margin on HSD, APL’s margins/ton during 1QFY12 is estimated to observe 11% YoY drop during 1QFY12. 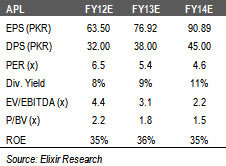 Investment perspective: We continue to rate APL as BUY as at last closing price, it offers an upside of 33% to our Jun-12 PT of PKR550/share along with a FY12 dividend yield of 8%.

12% and 121% YoY higher HSD and FO volumes, respectively, led APL to register 37% YoY higher volumetric sale during 1QFY12. Moreover, MS witnessed robust 85% YoY jump in its volume during 1QFY12, due to which its contribution to core profitability has increased to 12% in 1QFY12 from 9% in the same period of last year. APL’s asphalt volumes, on the other hand, took a massive hit of 47% QoQ and 11% YoY. 1QFY12 volumes, however, were down 12% on QoQ basis primarily due to high base. 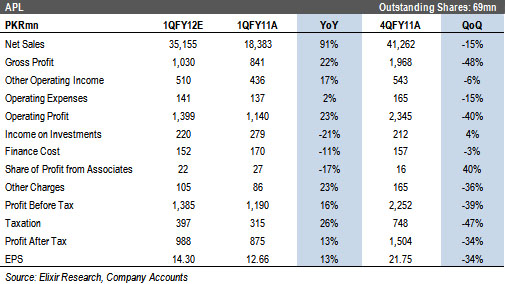 Margins per ton to decline by 11% YoY

APL’s realized margin on HSD was PKR0.84/liter, which is 40% lower than normalized margin of PKR1.39/liter during 1QFY12. This shall taper an estimated PKR116mn from the 1QFY12 gross profit. Ex-depot price of HSD are based on weighted average cost of PSO import and local ex-refinery prices, which often squeeze margins of other OMCs especially in times of cheaper import by PSO. 1QFY12 EPS would likely have been higher by PKR1.11 to PKR15.41, had APL realized normalized margin on HSD. 1QFY12 inventory gains are estimated at a mere PKR35mn. With muted 1QFY12 estimated inventory gains and lesser margin on HSD, APL’s margins/ton is estimated to observe 11% YoY drop during 1QFY12.

Other income; an additional cushion

Other income which comprises of commission/handling income and late payment charges is expected at PKR510mn (up 17% YoY) or approximately PKR5/share. With 10% YoY jump in naphtha export, commission and handling income are estimated to beef up by 49% YoY during 1QFY12. APL’s penal mark up income earned on receivables and penal interest expenses on late payments have roughly moved in tandem during last four quarters. We expect this trend to continue in 1QFY12 too, since APL effectively passes on the impact of piling receivables by delaying payments to fuel supplier.

Pakistan’s fiscal deficit for the first 3months of FY12 was 1.1% of gross domestic product. This compared with a deficit of 1.6% of GDP in the same period last year. The target for fiscal deficit is 4% of GDP in the year ending June 30.
Regional integration: Pakistan to cut tariffs on 233 products