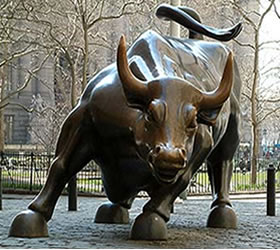 KARACHI : The Karachi Share market depicted bullish trend during the week ended on October 18, 2010 due to heavy buying by local as well as foreign investors on the back of expected improved corporate results, and the investors were also setting their positions ahead of the upcoming quarterly corporate result season.The KSE-100 index gained 171.36 points and closed at three-month high level of 10,432 points from 10,260.48 points. The KSE-30 index also crossed 10,000 points mark, to 10,094.80 points, depicting a surge of 126.25 points.Trading activity was aggressive and 450.021 million shares were traded during the week. However, the average daily volume at ready counter decreased to 90 million shares as compared to 91.85 million shares a week earlier.The main volume leaders included OGDC, Jahangir Siddiqui Co, Bank Al-Fallah, and Nishat Mills.

On Friday, the KSE-100 index rose by 0.22 percent or 22.82 points and closed at 10,431.84 points from 10,409.02 points.Analysts at Investcap said that the most important issue during the week was the NRO case which kept the market in check, while on the economic front, the announcement of higher government bonds cut-off yields also made the investors to stay away from the market.Despite increase in foreign remittances, the announcement of flood disaster estimates by the World Bank and Asian Development Bank increased the uncertainty about the recovery of the economy.”With the commencement of the upcoming quarterly results season, the market will be looking for positive triggers backed by better-than-expected corporate earnings,” said Saeed Khalid, an analysts at InvestCap. However, he said, the rift between the government and the judiciary is expected to play a significant role in keeping the market to sustain current levels.

“We expect the market to remain range-bound as there will be fewer potential triggers for the market to support higher index levels. Therefore, we maintain a ‘Neutral’ stance on the market,” he said.Ahsan Mehanti Director Arif Habib Investments said that the market presented better performance and four days’ bullish activity depicted that investors were expecting improved earnings announcement session from oil and gas, and banking and fertiliser scrips.Postponement in NRO case hearing by Supreme Court and renewed foreign interest played a catalyst role in positive activity at KSE during the week despite concerns for political and economic uncertainty, he added – Brecorder