Volumes up 4% YoY, retention prices down 13%: ACPL saw volumetric growth of 4%  YoY in FY10, where local dispatches grew by 4% YoY and exports by 5% YoY. Prices remained under pressure in FY10 due to excess supply situation in the country. Average retention prices for ACPL saw a decline of 13% YoY, while costs/ton declined by a mere 5% YoY.

Brand premium squeezed by competition; leading to lower margins: We believe ACPL has lowered its premium over other brands during FY10, owing to rising competition in the south, resulting to attrition in ACPL’s market share. 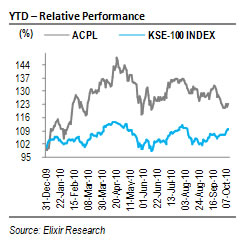 Lower finance cost & higher other income supported the bottom line: ACPL’s finance cost declined by 35% YoY, while other income increased 57% YoY, mainly because of higher interest income and gain on disposal of mutual fund units. Other income formed 53% of profit before tax in 4QFY10 (19% in FY10).

Future Outlook: ACPL managed to increase its market share during 1QFY11, which would likely have come at the cost of further attrition in price premium, and could possibly offset the advantage of QoQ uptick in cement prices in 1QFY11. We advise a cautious stance. 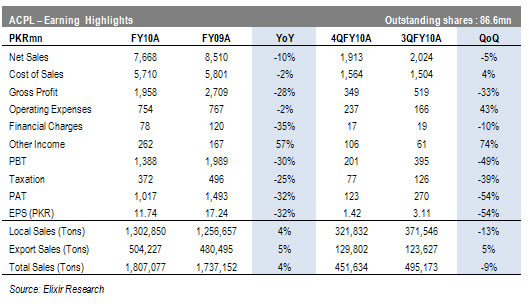 Lower margins in FY10 led to 32% YoY decline in earnings; Volumes up 4% YoY

FY10 earnings were down by 32% YoY mainly because of lower prices in the local market.  Retention prices were lower by 13% YoY in FY10 to PKR4,235/ton as opposed to a mere 5% YoY decline in cost/ton. Decline in costs mainly came due to lower depreciation expense due to change in depreciation methodology and revision of useful lives. Cost/ton, excludingdepreciation was down by only 2% YoY. As a result, EBITDA margin declined by 41% YoY to PKR873/ton in FY10. ACPL’s total volumetric growth was seen at 4% YoY, with 5% YoY increase in exports and 4% YoY rise in domestic sales in FY10. 4QFY10 EBITDA margin fell 63% QoQ to PKR371/ton as 13% QoQ increase in cost/ton was not matched by retentions, which were up a mere 2% QoQ.

ACPL’s finance cost declined 35% YoY, as the long term murabaha was paid off in FY10. Other income also supported the bottom line with 57% YoY increase, led by increase in interest income on cash balances and gain on sale of open ended mutual fund units. Other income was the major contributor to 4QFY10 earnings as it comprised 53% of pretax profit, much higher than FY10 average contribution of 19%.

While 1QFY11 average cement prices were up 18% QoQ for northern players, southern region prices increased by a mere 7% (PKR22/bag), thus indicating weaker QoQ margin uptick for southern players as compared to their northern counterparts. ACPL and LUCK both managed an increase in market share during 1QFY11, which could well have come at the cost of lower retentions as smaller players turned out to be the major loser.We, thus do not rule out further attrition in price premium for ACPL, which could possibly erode the advantage of QoQ uptick in cement prices during 1QFY11. We advise a cautious stance on ACPL.

Pakistan needs up to USD30bn for flood recovery