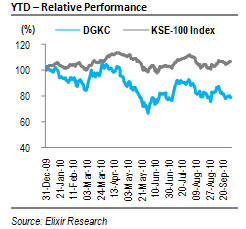 Other Income supporting bottom line: Other Income jumped by 18% YoY owing to higher dividend income from investment portfolio, bulk of which came from MCB. Other income contributed PKR2.5/share to the bottom line in FY10.

Near term outlook lacks triggers: While local prices have recovered since start of FY11, post flood volume uptick would not materialize until 3QFY11, in our view. Meanwhile, gas curtailment during winters and lower winter off take would remain dampeners on the scrip in the near term. 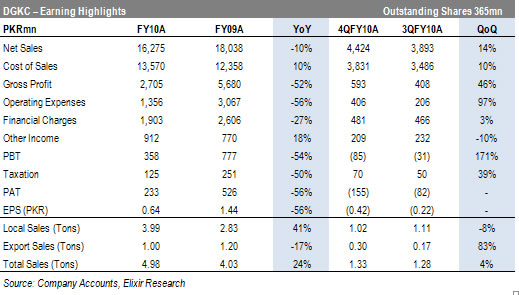 Lower margins behind weak earnings as dispatches were up 24% YoY

While cement industry’s total dispatches were up 9% YoY, DGKC posted stronger performance with total dispatches rising by 24% YoY in FY10. Although exports weakened by 17% YoY for DGKC, as shrinking margins made through port exports unviable for cement players in the northern region, 41% YoY growth in local sales more than offset the effect. However, EBITDA margins shrank by 51% YoY to PKR588/ton in FY10 as 27% YoY decline in average retentions was not matched by COGS/ton, down a mere 11% YoY.

During FY10, other income of the company increased by 18% YoY, with higher dividend income from MCB being the major contributor to YoY growth. Other income contributed PKR2.5/share to the bottom line during FY10 (PKR0.57/share during 4Q) implying that core business incurred a LPS of PKR1.86 during the year (LPS of PKR0.99 during 4QFY10).

Cement prices have recovered recently with current prices at PKR320/bag (+12% from FY10 average prices), which shall prop up margins and earnings in 1QFY10. However, with major post flood rebuilding efforts unlikely to start before 3QFY11, cement demand shall experience a seasonal weakening in the approaching winter season with possible gas curtailment likely to result in cost pressures.