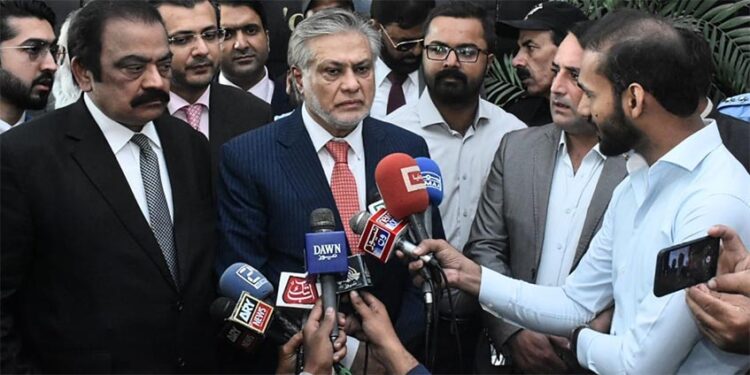 ISLAMABAD: Federal Minister for Finance and Revenue, Senator Muhammad Ishaq Dar said Wednesday that his government would try its best to revive economy, which has been critically damaged during Pakistan Tehreek-i-Insaf government’s tenure of quarter to four years.

Talking to media, after taking oath as Finance Minister, he said regaining the deserving value to country’s currency, bringing down inflation and reducing interest rate were among the priorities. Earlier, President Dr Arif Alvi administered the oath to Senator Ishaq Dar as Federal Minister.

Dar said, Pakistan was facing severe economic crisis currently due to quarter to four years’ mismanagement by PTI government, which had pushed the economy to the critical place, which even enemies could not have done.

The minister lamented that the PTI government had not only damaged the economy but had wasted five precious years of the country and pushed the country behind 30 years.

However, Dar was optimistic that the country would be put back on growth path as the Pakistan Muslim League (N) had the history of correcting economy during crisis in the past.

“As a nation we had challenges, we have faced them with success in the past,” he said while citing the examples of economic restriction following nuclear tests of 1998 and declared macroeconomic instability of 2013.

“I will not make verbal promises only,” he said and reminded of the past history of PML which had left the government in 2018 with lowest Consumer Price Index (CPI) based inflation of 4 percent, food inflation 2 percent, highest growth rate of 6.3 percent, highest reserves, interest rate at 6.25 percent and stable exchange rate of Rs104.50 against dollar.

He said, this all was done despite three sit-ins during the period which had affected the growth rate, otherwise the figures could have touched 7.5 percent. He said, had the country been allowed to grow with the same pace, it was poised to become 18th largest economy by 2025-26 instead of 2030, leaving behind Italy and Canada. However, it was pushed to 54th position, he said.

He said, becoming the 18th economy, the country could have enjoyed becoming part of G-20 world premium club, however everything was ruined.

To a question, the minister said that former finance minister, Miftah Ismail was the part of PML(N) economy team who had played good role in saving the country from default. He said, since the damages of around four years were very huge so could not be corrected in just six months.

He said, the rupee has already started gaining its value adding that the country was facing imported inflation.

The minister clarified that the case against him for not filing income returns for twenty years (1981-2001) was fake as he has been regularly filing the same for more than last forty years. He lamented that the culprits were roaming freely whereas right persons were facing difficulties.

He said, his passport was cancelled by the PTI government, however, when the incumbent government issued him passport two and half months before, he decided to travel back to Pakistan. He said, the UK court and even Interpol have acquitted him of all charges levelled by PTI.

He said that it was need of the time that the country is let to progress and prosper and economic development is not checked for political interests.