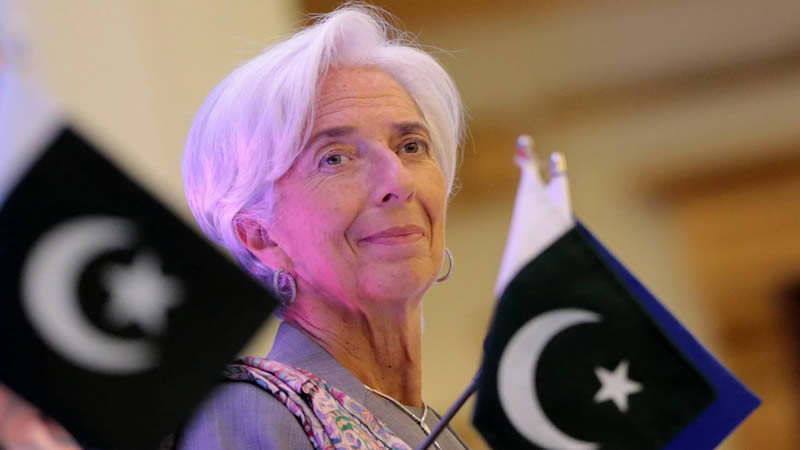 Pakistan and the International Monetary Fund (IMF) on Wednesday discussed additional tax measures for the mini-budget amid questions over realism of the revenue potential due to lower-than-expected receipts against Rs735 billion budgetary measures.

The net impact of additional Rs735 billion budgetary measures was only Rs235 billion or 31% during the first half (July-December) of this fiscal year, sources told The Express Tribune. The lower collection was because of sluggish economic growth and weak enforcement by the Federal Board of Revenue (FBR). However, inflation during this period remained in double digits.

This raises questions on whether the FBR can actually deliver on the new under consideration mini-budget of nearly Rs200 billion in the remaining four months of the fiscal year.

FBR management and the IMF delegation’s tax experts discussed potential revenue measures. Another meeting will take place today at the Finance Ministry level to decide about these measures.

The majority of the measures that came under discussion were related to the sales tax, which could further stoke inflation that has already hit a nine-year high of 14.6% in January.

FBR authorities were still resisting the IMF demand for a mini-budget and were looking for a steep cut of nearly Rs800 billion in its original target of Rs5.5 trillion. The IMF has already lowered the target to Rs5.238 trillion and was not inclined to give any further relaxation until Pakistan takes additional measures.

The Q Block did realize the need for the mini-budget and set out four key principles to work out the revenue measures.

However, the sources said that, from July-through December of this fiscal year, the net impact of these revenues measures on tax collection was just Rs235 billion or 0.5% of the GDP. The gross collection from these measures was in the range of Rs265 billion but the FBR still has to adjust close to Rs35 billion tax refunds of the zero-rated sectors.

The sources said that the situation has now raised the question whether the FBR can again deliver on the promised nearly Rs200 billion additional revenue measures in the remaining period of this fiscal year.

Due to a shortage of time before the close of the fiscal year, the only major revenue spinner that remains is to increase the standard General Sales Tax (GST) rate from 17% to 18%, which is highly inflationary and politically very risky.

But the FBR has not yet seriously considered this proposal, although it remains on the table.

The tax authorities blame sluggish economic growth, reversal of certain tax measures and delay in enforcement of administrative measures like the Computerized National Identity Card. However, there were also questions over the method that the FBR uses to work out the revenue impact of these numbers.

Dr Sarwar said that the FBR was hopeful that the budgetary measures would generate Rs415 billion more in the second half of this fiscal year, bringing total collection to Rs650 billion from these measures.

To a question, the spokesman said that the enforcement was only possible during healthy economic growth periods.

The sluggish economic growth coupled with imports compression erased Rs156 billion from the revenue base of the FBR, said the spokesman.

Major revenue spinners during the first six months of the fiscal year remained telephone bills, salary, profit on debt and property transactions. On the sales tax side, collection from petroleum products and textile products helped in raising the additional revenues.

The additional impact of increasing income tax rates for salaried class was Rs25 billion in the first half while the increase in property valuation rates also contributed Rs27 billion more.

The FBR missed the first seven months (July-January) revenue collection target by Rs385 billion despite imposition of Rs735 billion record new taxes. However, the FBR still believes it has done a remarkable job in the given economic conditions.

The FBR has collected a record Rs2.407 trillion in first seven months showing an increase of 17% over last year’s collection of Rs2.062 trillion, according to a handout issued by FBR on Saturday. This increase has been registered despite a $5 billion compression in imports. Last year, the FBR collected income tax, sales tax and customs duty at import stage amounting to Rs1 trillion, which has only grown by 6% to Rs1.07 trillion. As a consequence, there was tremendous negative impact on customs duty and income tax collected at import stage, it added.

On the other hand, domestic collection has increased from Rs1.066 trillion in the first half of last year to R1.34 trillion this year, showing an unprecedented increase of 27%, said the FBR.