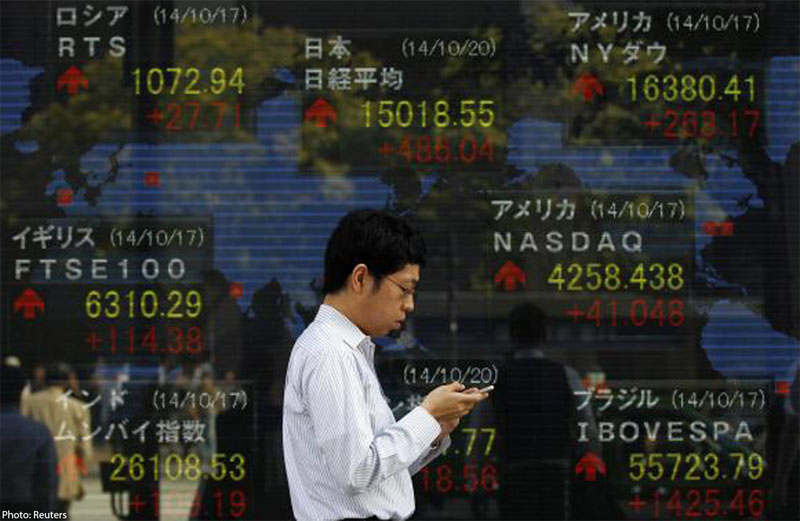 Asian shares held firm in early Monday trade after U.S. jobs data pointed to solid economic growth, while China’s export performance showed more resilience than some had expected. U.S. employers added 214,000 jobs in October, slightly below economists’ median forecast of 231,000, but logging the ninth consecutive month of gains of more than 200,000, the longest stretch since 1994.

Unemployment fell to a six-year low of 5.8 percent, but that did not improve wage growth, with average hourly earnings rising a slim 0.1 percent, falling short of a projected 0.2 percent gain. “It was a familiar combination. Rising payrolls, a falling jobless rate and stagnant wages. All this means is that the U.S. economy is moderately recovering, and no major shift in the Fed’s policy outlook, which should reduces market volatility,” Tohru Yamamoto, chief fixed income strategist at Daiwa Securities, said in a report. MSCI’s broadest index of Asia-Pacific shares outside Japan .

MIAPJ0000PUS rose 0.3 percent. Japan’s Nikkei .N225, however, slipped as the yen rebounded on profit-taking in the dollar following the U.S. payroll data. U.S. share prices ended flat on Friday following the payrolls data as some investors took some money off the table after the market’s rally to record highs. The U.S. dollar also stepped back from a four-year peak against a basket of currencies. [contentblock id=2 img=gcb.png]   The dollar index .DXY stood at 87.539, following a 0.4 percent fall on Friday as it retreated from 88.190 – a high not seen since June 2010. As the dollar slipped, the euro fetched $1.2460 EUR=, off a two-year low of $1.2358 hit on Friday. The yen traded at 114.54 to the dollar JPY=, about one percentage point above seven-year low of 115.60 per dollar hit on Friday.

The dollar’s fall lifted the battered gold price from 4 1/2-year lows. Gold traded at $1,170.15 per ounce XAU=, above Friday’s low of $1,131.85. Commodity currencies also won something of a reprieve, with the Australian dollar popping back above 86 U.S. cents AUD=D4 from a four-year low of $0.8540. Also helping underpin commodity currencies, data out of China on Saturday showed export growth did not slow as much as feared. “Overall, the data painted a similar macro picture as in previous months: Robust export growth led by the U.S. and ASEAN demand, and depressed imports driven by falling commodity prices and soft domestic demand,” said Jian Chang, an analyst at Barclays.

Exports grew 11.6 percent in October, slowing from a 15.3 percent jump in September but beating expectations of a 10.6 percent rise. Imports were weaker than expected. But the official Shanghai Securities News said on Monday the above-forecast export growth and heavy trade surplus in October showed signs of manipulation as well as inflows of speculative hot money, quoting economists. The next focus is China inflation data due later in the day. China’s annual inflation is seen at 1.6 percent in October, steady from the previous month, but way below the official target of 3.5 percent. (Reuters)