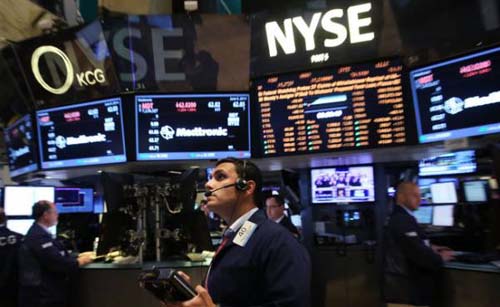 Global equity markets and the dollar rode a rebound in risk appetite on Tuesday that lifted the S&P 500 to a record high on signs of cooperation from Ukraine’s pro-Russian separatists over last week’s downing of a Malaysian jetliner.

Benign underlying U.S. inflation in June also supported stocks on views that the U.S. Federal Reserve will continue on a slow path to paring its bond purchase program and will begin to raise interest rates only in the latter half of 2015. After days of uncertainty, a train carrying the remains of some of the almost 300 victims arrived in Ukrainian government territory and separatist leaders have given Malaysian authorities the aircraft’s flight recorders.  The news helped settle market nerves, lifting shares in Asia, Europe and then on Wall Street as U.S. markets opened, and weakening safe-haven assets like the yen, gold and government bonds, which have been in demand over the past week.

MSCI’s all-country equity index rose 0.69 percent, while the FTSEurofirst 300 index of leading European shares climbed 1.32 percent to close at 1,373.75. All major European bourses closed up 1 percent or more. The benchmark S&P 500 set a record intraday high, though gains on Wall Street were not as strong as the rally in Europe. The Dow Jones industrial average rose 65.01 points, or 0.38 percent, at 17,116.74. The Standard & Poor’s 500 Index was up 9.52 points, or 0.48 percent, at 1,983.15. The Nasdaq Composite Index was up 28.10 points, or 0.64 percent, at 4,452.81. While geopolitical concerns remained high as Israel pounded targets across the Gaza Strip, saying no ceasefire was near, the fighting was viewed as no worse than on previous days. “Things have not worsened,” said Tom di Galoma, head of fixed income rates and credit trading at ED&F Man in New York.

“Equity markets globally were fairly robust, starting with Asia, Europe, and now Wall Street.” The euro fell to an eight-month low against the greenback, breaking below its key support of $1.35, largely on expectations the European Central Bank would provide more stimulus in the coming months, lowering regional interest rates. The single currency also hit a 5-1/2-month low versus the Japanese yen. The euro lost 0.41 percent against the dollar to trade at $1.3467. Against the yen, the dollar rose 0.06 percent to 101.45. The benchmark 10-year U.S. Treasury note rebounded slightly, up 2/32 in price to yield 2.4673 percent. Brent crude for September delivery fell 35 cents to settle at $107.33 a barrel, while U.S. oil for August delivery slid 17 cents to settle at $104.42 a barrel. The U.S. August contract expires on Tuesday. (Reuters)