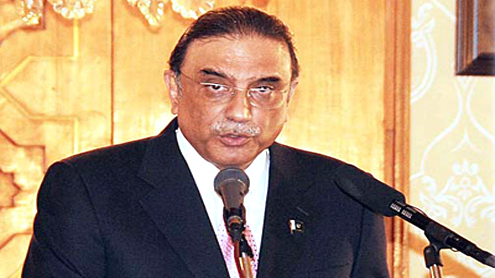 SEOUL: President Asif Ali Zardari Tuesday offered an exclusive Economic Zone to the South Korean entrepreneurs near Karachi and urged them to benefit from the lucrative incentives offered by Pakistan to the foreign investors.

Addressing a luncheon hosted in his honour by President of Republic of Korea Myung-bak Lee here at the Cheong Wa Dae following the summit-level talks, the President said Pakistan had decided to offer the South Korean investors special incentives for setting up industrial units in Sindh near the coast, either on their own or to undertake joint ventures with the Pakistani counterparts for the mutual benefit. The President said Pakistan provided an investor friendly environment and assured that the Government will assist them in all possible manners.

He said that specific policies aimed at trade liberalization and continuity of economic policies have been adopted in order to facilitate the business communities. Recounting various incentives offered by the Government of Pakistan, he mentioned availability of equal opportunities to local and foreign investors, permission to repatriate capital and profit, transit agreement of the country with neighboring Afghanistan, trade liberalization with India, currency swap agreements with a number of countries and legislation to protect incentives to the investors.

He said that recently a new law “Special Economic Zones” has been enacted which gives one time exemption from all custom duties on the import of all capital goods and machinery and tax exemption for ten years. The public-private partnership model adopted by the government has created a win-win situation for all the stakeholders including the investors, he continued.Pointing out that South Korean products were a house-hold name in Pakistan these days, the President said that the country’s consumer market of around 200 million people offered huge opportunities to the South Korean companies to be further explored.

He said there was huge potential for investment in several sectors including energy, infrastructure development, energy and engineering sectors.He also said that Pakistan’s strategic location provided the entrepreneurs and manufacturers a great opportunity to reach out to a huge market of over 3 billion in its neighbourhood, in Central Asia and beyond.The President said though the bilateral trade between the two countries has grown to US 1.5 billion, over the years, however, there was a huge potential to raise it to US $5 billion in the next five years.

During his speech, the President also recalled his first visit to Korea, along with Shaheed Mohtarma Benazir Bhutto, back in 1996 and said he still cherishes the memories of that visit.He said it has been 30 years since the initiation of diplomatic ties between the two countries, yet there was a great scope to further expand and strengthen the bilateral ties for the mutual benefit of the people of the two countries.The President stressed upon increased people to people contacts and enhancing multifaceted cooperation saying that it will go a long way in further promoting and strengthening the bilateral ties.

The President also dilated upon the regional situation with particular reference to situation in Afghanistan. He reiterated Pakistan’s keen to have peace in the region. He said that the people of Pakistan were committed to continue their struggle against the menace of extremism and terrorism till its logical conclusion.The President said that Pakistan fully supports the efforts for finding a peaceful solution to the crisis in the Korean Peninsula through the Six Party Talks. We wholly endorse the spirit, sentiments and directions of the Policy of Peace and Prosperity that the government of Korea is pursuing, the President continued.

The President also urged that both Pakistan and South Korea should join hands and work together for a better future.President Myung-bak Lee welcoming President Zardari to South Korea expressed the hope that the visit of President of Pakistan will further solidify bilateral relations between the two countries.  He appreciated the contributions of Pakistan for global peace and stability and particularly mentioned Pakistan’s role and huge contributions in the fight against extremism and militancy.

President Myung-bak Lee, specially spoke high of President Asif Ali Zardari and said that his able leadership has helped steering Pakistan out of the impacts of ongoing war against militancy, global economic meltdown and the recurring devastating floods that the country witnessed during recent years. He also appreciated the role of the leadership of Pakistan in strengthening of democracy in the country and upholding the rights of the women and the minorities.The South Korean President termed the talks earlier in the day as fruitful and said it will strengthen bilateral relations. He said the Korean investors were keen to invest in Pakistan’s manufacturing sectors and infrastructure development and expressed the hope that the bilateral economic ties will also get a boost with President Zardari’s visit. – APP

Mideast to invest $470b for new jets