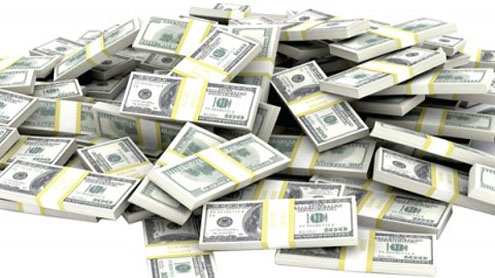 KARACHI: It augurs well for the country’s external account as Pakistanis working abroad keep remitting on average a billion dollars every month to take remittances to over $ 3.599 billion during the first quarter of current fiscal year ranging from July to September 2012‐13.

This, the central bank reported Wednesday, shows a growth of 9.16 percent or $301.91 million compared with $3.297 billion the country had received during the corresponding period of last financial year.The state bank attributes this unprecedented increase in the inflow of worker remittances to Pakistan Remittance Initiative (PRI), a joint initiative launched by the federal government through the central bank and the ministries of overseas Pakistanis and finance some three years back in April 2009.

“The continued growth in workers’ remittances is the result of the efforts made by Pakistan Remittance Initiative (PRI) in collaboration with other stakeholders to facilitate both Overseas Pakistanis and their families back home,” the State Bank said Wednesday.The inflow of remittances in the review period from Saudi Arabia, UAE, USA, UK, Gulf Cooperation Council (GCC) countries, including Bahrain, Kuwait, Qatar and Oman, and EU countries amounted to $ 961.09 million, $753.08 million, $623.72 million, $500.15 million, $396.14 million and $97.05 million, respectively. The same quarter in FY12 had seen inflows worth $854.18 million, $746.62 million, $627.75 million, $369.36 million, $354.61 million and $101.73 million from the respective destinations.

The remittances received from Norway, Switzerland, Australia, Canada, Japan and other countries amounted to $ 267.88 million as against $242.95 million received in last year’s first quarter.The monthly average remittances for the quarter in review total at over $1.199 billion compared to $1.099 billion received during the corresponding period of last year. Last month, over $1.135 billion were sent back home by overseas Pakistanis as against $ 890.42 million they remitted in the same months of FY12. This depicts a month-on-month growth of 27.52 percent, the bank said.

The central bank said since its inception, the PRI has taken a number of steps to enhance the flow of remittances through formal channels which include: (a) preparation of national strategies on remittances (b) taking all necessary steps to implement the overall strategy (c) playing the advisory role for financial sector in terms of preparing a business case, relationship building with overseas correspondents, creating separate efficient remittance payment highways and (d) becoming a national focal point for overseas Pakistanis through round the clock call centre (021‐111‐222‐774) with toll free lines, separate web site etc. The PRI, it said, had been taken to achieve the objective of facilitating and supporting faster, cheaper, convenient and efficient flow of remittances. – PT