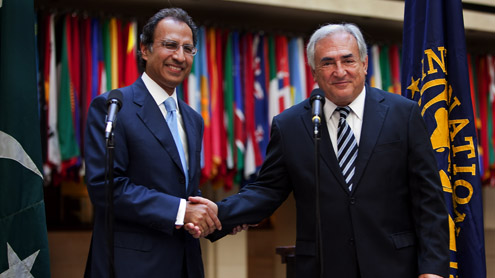 KARACHI: Pakistan may have to return to the International Monetary Fund for financial assistance this year amid an unstable macroeconomic situation, the nation’s central bank governor said.

Yaseen Anwar, governor of the State Bank of Pakistan, said Pakistan could meet its overseas debt obligations for now. But looming repayments to the IMF from a program that ended last year are likely to test the nation’s finances in the months ahead. “From next fiscal year we’re going to have stresses. We see reserves going down quite aggressively,” Mr. Anwar said in a interview at the central bank’s headquarters in Karachi. Mr. Anwar said the government’s failure to get a massive budget and mounting trade deficit under control could make it difficult to meet the more than $4 billion in IMF loans coming due in the fiscal year starting July 1. “There are many serious challenges,” Mr. Anwar said. “I have a rough job here.” The IMF ended a three-year $11 billion program with Pakistan last year after disbursing only around $8 billion. The fund withheld the final tranche of more than $3 billion in large part because the government failed to take steps to reduce its budget deficit. Payments on the loans have already begun, but they ramp up in the months ahead.

The fund and foreign leaders, including U.S. Secretary of State Hillary Clinton, have been publicly critical of Pakistan for failing to tax some of its richest citizens, including politicians. The country’s tax-to-GDP ratio at 9% is among the lowest in the world, and whole sectors, including agriculture, are exempt, reducing funds to spend on education and create employment opportunities in areas where Islamist militancy is rampant. Meanwhile, large subsidies on electricity and other commodities have kept expenditures high and exerted enormous pressures on state finances. The government of President Asif Ali Zardari has done little to address the problem since coming to power in 2008. On Friday, Finance Minister Abdul Hafeez Shaikh will announce the budget for the year starting July 1. But with elections due by early 2013, Mr. Shaikh was keen last week to say there would be no tax surprises in the budget. “Our tax-to GDP ratio is way below where it should be,” Mr. Anwar said. Instead of raising taxes, he said, the government has in recent months increased its direct borrowing from the central bank, effectively printing money to cover the deficit. The government, has borrowed 442 billion rupees ($4.8 billion) directly from the central bank so far this fiscal year, Mr. Anwar said—financing requests that he can’t turn down. “I still have autonomy, but not enough to bounce a check” from the government, he said.

That borrowing has kept inflation in double digits even as economic growth has slowed to around 3%. Mr. Anwar said he expected inflation, currently hovering just below 11%, to pick up “in the next month or two.” The central bank, he said, is unlikely to be able to cut its key lending rate—currently at 12%—in the near future. Even at these high rates, companies are finding it hard to get loans in Pakistan as the big commercial banks prefer to make profits buying government treasury bills, he added. Concerns over the economy also have hurt the Pakistan rupee, which has been trading around record lows at 92 rupees to the U.S. dollar in recent weeks. The central bank hasn’t intervened in the foreign-exchange market in recent weeks. “We let the market force dictate the exchange rate,” Mr. Anwar said. The governor pointed to some positives. Remittances from Pakistanis working overseas are up 20% at more than $13 billion in the current fiscal year. The central bank has worked out currency-swap agreements with China and Turkey which will help ensure currency liquidity, he added. The pressure on the trade deficit also is muted as global oil prices have come off highs, although exports took a “nose-dive faster than we expected” in recent months due to lower global prices for cotton, Mr. Anwar said.

Pakistan’s heavy reliance on oil imports caused a balance-of-payments crisis in 2008, forcing the country to turn to the IMF. This time around, concerns are focused on the budget deficit—which is 8% of GDP—and the IMF repayment schedule. Mr. Anwar said the central bank won’t repay the IMF loans by buying U.S. dollars. That fear sent the Pakistani rupee careening lower earlier this year, but the currency has since stabilized. The bank instead will run down foreign reserves, which Mr. Anwar expects to fall by about half in the coming fiscal year to $8 billion, representing less than two months of imports. Pakistan’s Taliban insurgency and macroeconomic instability have led to a fall off in foreign investment to just over $500 million in the current fiscal year from annual levels over $8 billion a few years ago. Low foreign investment is a “real challenge,” Mr. Anwar said. He said he had turned down requests from local banks to buy the Pakistan business of HSBC Holdings PLC, which announced last month it was pulling out of the country, and is instead inviting foreign bidders.
-onlinenews