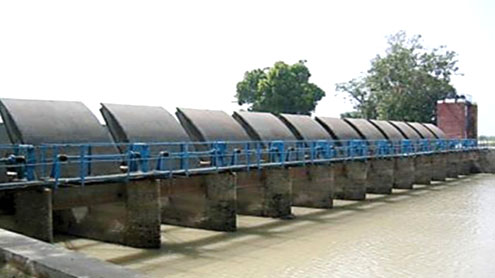 He said though the Indus River System Authority released all 49,900 cusecs of run of the Indus river water downstream Tarbela Dam for hydel power and irrigation purposes, but this quantity was insufficient to run all hydel power generation units at Tarbela at full capacity (3,600MW).Pakistan has a hydel power generation capacity of about 6,500MW via Tarbela, Mangla, Ghazi Barotha , Warsak, Chashma and other hydel stations during the monsoon season, he added

Meanwhile, Wapda engineers said that water flows in the country’s four rivers remained “the lowest in a decade”. The water supply in River Indus, after touching a peak level of 57,000 cusecs at Tarbela on Friday, again fell to 49,900 cusecs on Sunday because of low temperatures in upper parts of the country, they said.Water inflow in River Indus May 20 was 49,900 cusecs against 152,100 cusecs on 20 May last year. Similarly, in River Jhelum, water inflow at Mangla Dam last year was 78,886 cusecs against 43,480 cusecs on May 20 this year.

They said that water inflow in other main sources of rivers Jhelum, Kabul and Chenab was also not picking up in the third week of May. The sowing of Kharif crops, including cotton, was being hampered because of lack of irrigation water, they said. Meanwhile, a weather report issued by the Meteorological Department said that Saturday’s trough of westerly wave had moved away. “A fresh trough of westerly wave lies over upper parts of the country,” it said.