by ToP
in Economy
5 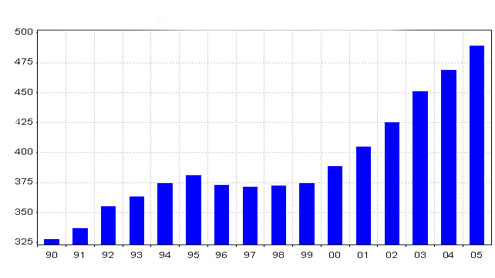 ISLAMABAD: The Fiscal Policy Statement 2011-12 has pointed out that power sector subsidies amounted to 1.9 percent of the gross domestic product (GDP) in fiscal year 2011 and it shall be even higher in FY 2012 as in addition to tariff differential subsidies, and the issuance of T-bills and PIBs to repay government guaranteed power sector Term Finance Certificates shall contribute another 1.5 percent of the GDP to the fiscal deficit.

Being structural in nature, most of these factors have not yielded any traction and hence the task of fiscal policy remains challenging in 2011-12 and beyond unless structural reforms are implemented quickly and effectively. Fiscal policy is interrelated with other macroeconomic variables including growth, investment, inflation, monetary policy and external account. Although achieving higher fiscal consolidation remains a key element of the government’s strategy for maintaining macroeconomic stability, a prerequisite for sustainable growth, the actual fiscal performance of past two years has shown deviation from original targets. While one may question the wisdom of targeting higher fiscal consolidation given the country’s low growth envelope, one needs to examine the nature of fiscal deficit to determine whether it is helping higher sustainable growth or working counter to this objective.

After laudable performance in FY 2009 wherein fiscal deficit was reduced dramatically to 5.3 percent from 7.6 percent in the preceding year, the gains were quickly reversed as fiscal deficit increased sequentially in FY 2010 and FY 2011. Actual consolidated fiscal deficit for FY 2011 came in at 6.6 percent of GDP, far higher than the original budgeted target of 4.0 percent for the year. Although the reported deficit figure included payments amounting 0.7 percent of GDP representing cost of energy subsidies relating to previous years, even excluding it the adjusted fiscal deficit of 5.9 percent was substantially higher than the original target.

Slippages in both revenues and expenditures led to FY 2011 budget deficit missing the target. Gross revenue collection (tax and non-tax) was 12.1 percent lower than the budgeted target while total expenditures (current and development), adjusted for one off payment of energy subsidies pertaining to previous years, were 2.4 percent higher than budgetary estimates. The Federal Board of Revenue (FBR) tax collection fell 6.4 percent short of target while non-tax revenues were 23.6 percent less than target due to non-realization of expected 3G licence receipts and lower logistical support receipts from the US. On the other hand, expenditure exceeded the target due to higher subsidies and flood-related spending despite Public Sector Development Programme (PSDP) spending being 24 percent lower than the budgeted target.

A significant positive masked by overall weak fiscal numbers is the distinct uptrend in FBR tax collection since 4QFY2011. Helped by withdrawal of general sales tax (GST) exemption on several sectors and levy of one-off flood surcharge, FBR tax collection grew by 28.7 percent in 4QFY2011. However, the trend has continued into FY 2012 with FBR tax collection increasing by 21 percent during Jul-Dec 2011 despite shifting of GST collection on certain service to the provinces.

Persisting energy crisis is the common denominator adversely impacting key macroeconomic variables entailing huge social and economic costs in shape of lower GDP growth while being a major drain on fiscal resources. The chronic inter-corporate debt engulfing the entire energy chain and growing energy shortages are dissuading investment not only in the energy sector where it is most needed but in other industrial sectors as well. Moreover, continuing energy subsidies and ensuing high fiscal deficit are inhibiting external inflows especially those from multilateral financial institutions. Slippages in implementing fiscal reforms, particularly implementation of reformed GST, elimination of electricity subsidies and resolution of circular debt, was a key reason behind International Monetary Fund Stand-by Agreement staying suspended since June 2010 until it finally lapsed in November 2011.

Power sector subsidies amounted to 1.9 percent of the GDP in FY 2011 and it shall be even higher in FY 2012 as in addition to tariff differential subsidies, issuance of T-bills and PIBs to repay government guaranteed power sector TFCs shall contribute another 1.5 percent of the GDP to the fiscal deficit.A combination of internal inefficiencies and pricing anomalies is responsible for the circular debt problem confronting the energy sector.

Some specific factors include; tariff anomalies in power and natural gas sectors; misallocation of natural gas; unfavourable power generation mix; and inefficient operations of public generation and utility companies. Eliminating these problems is imperative for attracting investment in energy and other industrial sectors. Fiscal policy faces a critical trade-off between short-term inflation and long-term economic growth. Eliminating energy subsidies through tariff rationalisation shall spike inflation in the short-term but that is an unavoidable cost to attract the investment needed for higher sustainable economic growth. – Dailytimes