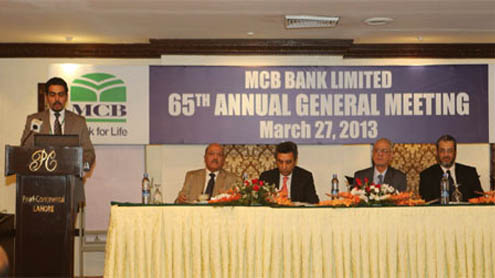 KARACHI: The MCB Bank Limited reported profit-before-tax of Rs 32.054 billion and profit-after-tax of Rs 20.941 billion with an increase of 2.0 percent and 8.0 percent, respectively.

This was revealed during the 65th Annual General Meeting of the shareholders of MCB Bank Limited under the chairmanship of Aftab Ahmad Khan. The meeting approved the recommendation of board of directors for final cash dividend at 30 percent and 10 percent bonus issue.The chairman informed the members that MCB completed yet another remarkable year in terms of financial performance and growth. Net mark-up income of the bank was reported at Rs 40.856 billion whereas non-mark-up income came at Rs 9.153 billion.

Non-mark-up income registered an increase of Rs 1 billion or 13 percent owing to 16 percent increase in fee, commission and brokerage income and 19 percent increase in dividend income during the year.Earnings per share (EPS) for the year came at Rs 22.77 as compared to Rs 21.12 for December 31, 2011. Return on assets came at 2.95 percent, return on equity was recorded at 25.07 percent and book value per share improved to 95.84.

Total assets of MCB Bank Limited grew by 17 percent to Rs 765.899 billion. The analysis of the asset mix highlights 27 percent increase in investments to Rs 402.069 billion and 5.0 percent increase in gross advances to Rs 262.392 billion. The quality of asset saw considerable improvement as the non-performing loans of the bank reduced by 4.0 percent to Rs 25.562 billion reflecting improvement in infection ratio as at December 31, 2012.

The deposit base of the bank grew by 11 percent closing at Rs 545.061 billion with 18 percent increase in saving deposits, 13 percent increase in current deposits and 12 percent decrease in fixed deposits. CASA base, as a result has further strengthened to 85 percent as compared to 81 percent last year.

The administrative block of the bank registered an increase of 10 percent over 2011, which considering the inflationary pattern followed during the year, falls within the acceptable levels. The provision charge of the bank decreased significantly by Rs 3.176 billion, primarily on the back of strengthened risk management framework. Moreover, AF Ferguson and Company, Chartered Accountants have been appointed as the auditors of the bank for the next financial year. – DailyTimes