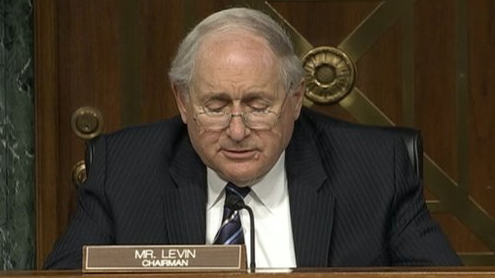 HSBC provided a conduit for “drug kingpins and rogue nations”, according to a US Senate committee investigating money laundering claims at the bank.

Its report said suspicious funds from countries including Mexico, Iran and Syria had passed through the bank. The president and chief executive of HSBC Bank USA, Irene Dorner, apologised to the committee for the behaviour which she said deeply regretted.  Earlier, HSBC’s head of compliance, David Bagley, resigned at the hearing.  Ms Dorner apologised “for the fact that HSBC did not live up to the expectations of our regulators, our customers, our employees, and the general public”. She said she had worked hard to change the culture at the bank. The bank also said it was in the process of closing 20,000 accounts in the Cayman Islands as a result of the investigation.  The US Department of Justice said it is conducting a criminal investigation into HSBC’s operations.

Senator Carl Levin said HSBC’s lack of controls at its US and overseas units had been “a recipe for trouble”.  Mr Levin is chairman of the Senate Permanent Subcommittee on Investigations, which looked into HSBC’s activities. Mr Levin said an audit had found that: “From 2001 to 2007, HSBC affiliates sent almost 25,000 transactions involving Iran worth over $19bn dollars through HBUS and other US accounts, while concealing any link with Iran in 85% of the transactions.”  HSBC senior executives in London knew what was going on, he said, but allowed the “deceptive conduct” to continue. Key HBUS officials were also informed early on, he said.  US government rules prohibit financial transactions with Iran and certain other countries, the committee said the bank’s actions in getting round these had in some cases assisted terrorism.

According to the Senate committee, HSBC accepted more than $15bn in cash from subsidiaries in Mexico, Russia and other countries at high risk of money laundering but failed to conduct any monitoring of these bulk cash transactions between mid-2006 and mid-2009.  The report also found that HSBC knew of lax anti-money laundering practices at its Mexican subsidiary HBMX, which had dated back to its purchase in 2002.  HBMX was warned, on at least two occasions, by Mexican authorities that drug money was probably being laundered through HBMX accounts.  The hearing comes at a time when the standing of banks is already at rock bottom, says BBC New York business correspondent, Michelle Fleury. She says: “The scandal over the manipulation of the Libor inter-bank lending rate hasn’t exactly inspired confidence and has also been under scrutiny in Congress on the same day. The idea though that one of the world’s biggest banks would be facilitating violent crime threatens to cast an even darker shadow over banks and bankers.”

One HSBC executive, Paul Thurston, who was head of retail banking and wealth management, said the bank had taken wrongdoing seriously, and had taken action on many occasions, including dismissing staff.  He told the hearing of the difficulties of working in Mexico, which, he said, was a dangerous environment where kidnapping of bank staff was widespread and employees came under pressure from criminals who would attempt to corrupt them. Mr Thurston referred to substandard record-keeping and the difficulty of knowing who the bank’s clients were. He said: “Some of the things I found frankly took my breath away.”

Before the hearing began, HSBC said in a statement, that it expected to be held accountable for what went wrong.  “We will apologise, acknowledge these mistakes, answer for our actions and give our absolute commitment to fixing what went wrong,” HSBC said.  Senator Levin spoke  of a “polluted” system that allowed black-market funds to move through the US banking system.  “In an age of international terrorism, drug violence in our streets and on our borders, and organised crime, stopping illicit money flows that support those atrocities is a national security imperative,” said Mr Levin.

The report also concludes that the US bank regulator, the Office of the Comptroller of the Currency, failed to properly monitor HSBC.  Many of HSBC’s breaches of US anti-money laundering relate to its use of bearer share accounts. Under the rules for these accounts, ownership of shares and the income they incur can be passed from person to person in secrecy.  HSBC’s US subsidiary HBUS had opened more than 2,550 accounts for bearer share corporations.  These businesses are commonly set up in tax havens such as the British Virgin Islands.-BBC

SECP opens Takaful insurance for all