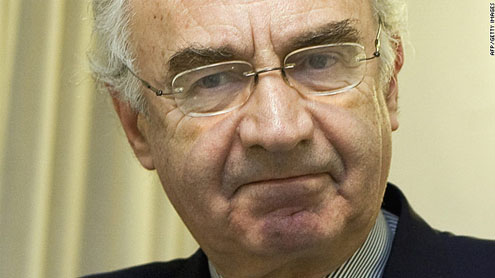 The director of the Vatican Bank, Ettore Gotti Tedeschi, has been removed from his post for dereliction of duty, the Vatican says.

The bank’s board of directors unanimously passed a no-confidence vote in Mr Gotti Tedeschi, a statement said.It said he had failed “to carry out duties of primary importance”, but it did not elaborate.In 2010 Italian police launched an investigation against Mr Gotti Tedeschi as part of a money-laundering inquiry.Members of the board believed Mr Gotti Tedeschi’s dismissal was needed to “maintain the vitality of the bank”, the Vatican statement said.

The board will now look for a new director to restore relations with the international financial community, “based on mutual respect for accepted international banking standards”.Mr Gotti Tedeschi declined to comment on his dismissal. He told journalists: “I’d rather say nothing, otherwise I’d say ugly things.”But in remarks to the Reuters news agency, he said: “I have paid for my transparency.”The moves comes as Moneyval, the Council of Europe body tasked with counteracting money laundering, prepares to rule at the beginning of July on whether the Vatican meets international standards on financial transactions.

Memos leaked earlier this year suggest there are serious differences among Vatican officials over how far to go in ensuring financial transparency, according to media reports.The Vatican Bank, known officially as the Institute for Religious Works (IOR), was created during World War II to administer accounts held by religious orders, cardinals, bishops and priests.It lost £250m in a scandal involving the collapse of one of Italy’s biggest private banks – the Banco Ambrosiano – in 1982, with which it had close ties.

The Vatican Bank has been headed by Mr Gotti Tedeschi, 62, a trained economist, since 2009.When Mr Gotti Tedeschi was placed under investigation in 2010, the Vatican said it was “perplexed and astonished”, and expressed full confidence in Mr Tedeschi.It said the matter was the result of a misunderstanding, and that none of its employees were involved in any wrongdoing.

As part of the inquiry, Italian tax police seized 23m euros ($29m, £18.4m) that the Vatican Bank had tried to transfer from a small Italian bank called Credito Artigiano.A month later, the Vatican set up a new financial authority to combat money laundering and make its financial operations more transparent, ahead of an EU deadline.The move was aimed at winning inclusion in the European Commission’s “white list” of states which comply with international standards against tax fraud and money-laundering. – BBC