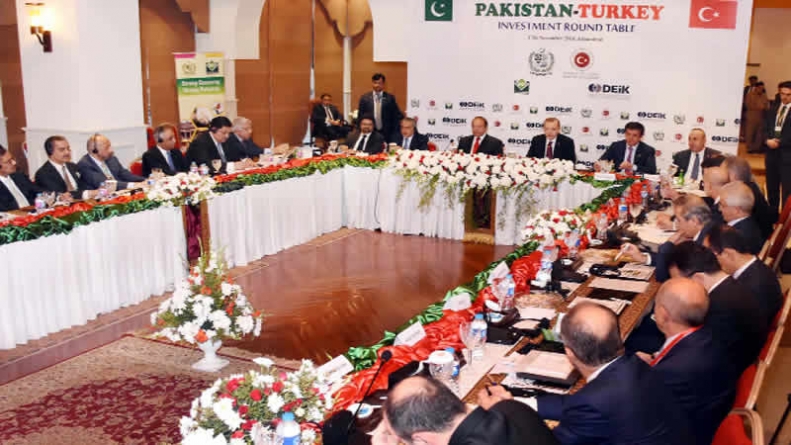 President Recep Tayyip Erdogan on Thursday urged the Turkish businessmen to invest in China Pakistan Economic Corridor (CPEC) projects of Pakistan saying that the CPEC was a game changer for the region. He stated this while addressing the Pakistan-Turkey Roundtable Investment Conference.

Prime Minister Nawaz Sharif and Chairman Board of Investment Dr Miftah Ismail also spoke on the occasion. The conference was attended by federal ministers, diplomats, business representatives of the two countries and members of the Turkish delegation. During the conference the Turkish president thanked the government and people of Pakistan for their hospitality. He said that Pakistan and Turkey were not only brotherly countries in expression but also in reality. He also praised the support given by the people of Pakistan to the Turkish nation.

Dr Miftah Ismail welcomed the President of Republic of Turkey and Prime Minister of Pakistan and business circles from Turkey and Pakistan in the investment roundtable and highlighted that Pakistan was offering a very liberal investment regime in the region with diverse and business friendly incentives. He said that the government of Pakistan had approved Special Economic Zones (SEZ) Act, offering lucrative investment incentives. Under this initiative, the government offered exemption from custom duties and taxes for all plants and machinery imported into Pakistan as well as an income tax cuts for 10 years, he added. He invited the Turkish investors to invest in all sectors of Pakistan specifically in agriculture machinery, pharmaceuticals, mining, and to further boost the investment and trade relations between the two brotherly countries.

Pakistan due to its strategic location, cheap labour and cheap raw material outclass other countries. He informed the participants that under the dynamic leadership of Prime Minister Nawaz Sharif and Finance Minister Muhammad Ishaq Dar, Pakistan’s economic outlook had altogether changed in the last three years, a fact which was now being globally acknowledged. Dr Ismail said that due to sound economic policies and reforms, the budget deficit had come down from 8.8 percent of GDP in 2013 to 4.6 per cent and was expected to further fall to 3.8 percent in the current fiscal year.

“Our inflation was down to less than 3 percent, our interest rates are the lowest in decades, our currency was stable against international currencies and our foreign exchange reserves today have increased to aDr Miftah said that the GDP growth rate stood at over 4.7 percent last year, which was the highest in eight years and it was expected that the economy would grow by 5.5 percent by the end of current fiscal year. “This we understand for a developing country was not enough and hopefully soon we would grow faster as we shift our priority from stability to growth,” he added. -dailytimes