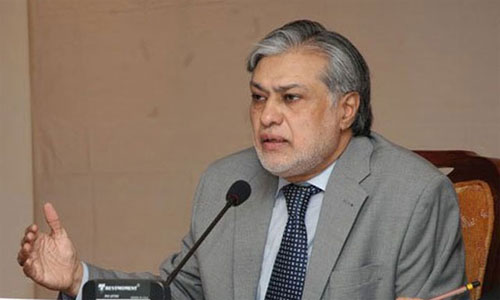 Finance Minister Senator Mohammad Ishaq Dar said that due to better economic performance, the international financial institutions, including World Bank and Asian Development Bank, were back in business with Pakistan after lapse of five to seven years.

He was talking to Zakaria Usman, President Federation of Pakistan Chambers of Commerce and Industry (FPCCI), who called on him to discuss issues related to the budget for fiscal year 2014-15. The finance minister said that the economy had performed much better as compared to the corresponding period of the last fiscal year. The revenue collection was Rs 1745 billion in July-April 2013-14 against Rs 1509 in the corresponding period of last fiscal year, registering an increase of 15.6 pc, he added. Similarly, he said, the budget deficit decreased to 4pc as compared to 5.5 pc in the same period.

Trade deficit was down by 2.5 pc and GDP growth rate 4.1 pc as compared to 3.4 pc in first half of the financial year, he added. The FPCCI President appreciated steps taken by the government in order to put the economy back on track and assured the minister that the business community was with the government in reforming the system. He informed the Finance Minister Ishaq Dar that he and his delegation had very useful meetings with the FBR officials. Proposals had been forwarded to the officials concerned for consideration in the next budget, he added. He also assured the Finance Minister that the business community would continue to work with the government for betterment and prosperity of the people. -nation