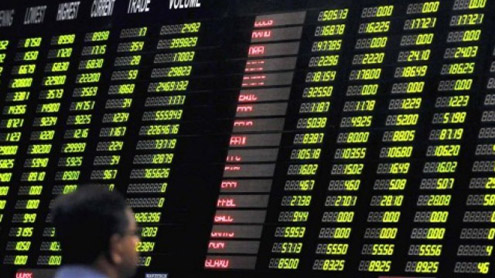 In the three days, the index recouped all of the 770 points that it had conceded on Friday and Monday when strong selling pressure in the heavyweight OGDC and MCB Bank on liquidation of a foreign fund had pulled the entire market down. Foreign inflows on Thursday amounted to $0.70 million. Sector-wise details showed that the overseas investors bought shares in the net sum of $2.6m in the oil and gas sector and $1.1m in banking sector; cements on the other hand saw foreign net sale of $3.5m.

Analyst Ahsan Mehanti stated that the market saw across the board rise in stock prices on renewed foreign interest in banking and oil stocks after rupee rose to 14-month high against dollar in interbank market. Volume surged by 107pc. The banking sector stayed in the limelight throughout the day. The banking stocks were traded like hot cakes following the long-term bond auction on Wednesday which fetched the government a massive sum of Rs530bn against the target of Rs60bn.

It was thought to be the highest amount ever secured in a single government bond auction. Investors anticipated that it would help banks secure improved earnings going forward. MCB Bank was up 3.8pc. The bank had taken a beating in the recent sell off by a foreign fund retreating from levels of Rs260 on Friday, to close at Rs247 on Thursday. UBL hit the ‘upper circuit’. Analysts assumed that the high bond yields would help banks counter the squeezing spreads under a subdued interest rate scenario. Mid tier and smaller banking stocks also put up an impressive performance.  -Dawn