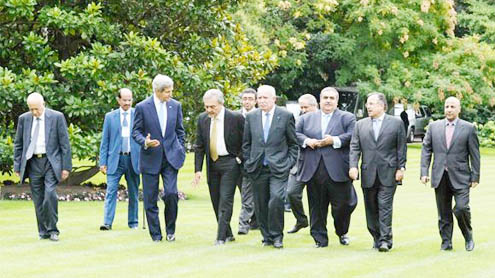 US Secretary of State John Kerry said Sunday that Arab League ministers had agreed at talks in Paris that Syria crossed a “global red line” in its alleged chemical weapons attack.

Kerry said a number of Arab countries were willing to sign a statement agreed by 12 countries of the G-20 that called for a reaction to the alleged attack, and that they would make announcements in the next 24 hours.“All of us agree, not one dissenter, that Assad’s deplorable use of chemical weapons… crosses an international global red line,” Kerry told journalists after the talks.

“Today we discussed the possible and necessary measures that can be taken,” he said. “A number of countries immediately signed on to the G-20 agreement,” Kerry said, naming Saudi Arabia as among them.“I am not going to name the other countries simply because we agreed in the meeting they would go back and make their own announcements, which they will do within the next 24 hours,” Kerry said.“Everybody understood that the decisions need to be made within the next 24 hours.”“They have supported the strike and they have supported taking action,” Kerry said. – ArabNews