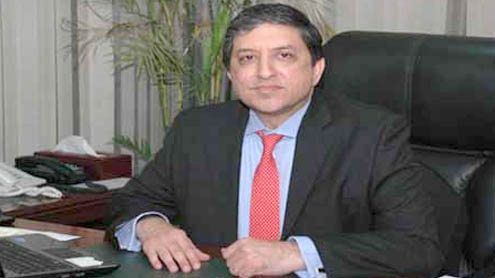 ISLAMABAD: Federal Minister for Finance Saleem Mandviwalla on Friday said that a comprehensive roadmap would be left for the upcoming government to get rid of the circular debt and improve performance of Public Sector Companies (PSCs) on sustainable basis.

The federal minister was speaking at the signing and launching ceremony of the Corporate Governance Rules 2013 for Public Sector Companies here at a local hotel. “We will leave roadmap for the next government to get rid of circular debt and make other state owned entities effective,” Mandviwalla remarked while terming the circular debt and State Owned Entities as two major challenges.Mandviwalla categorically denied the reports that the government had provided Rs100 billion to Pakistan International Air (PIA) and clarified that Rs. 46 million were provided to the national flag carrier to buy new aircrafts to facilitate the passengers.

The federal minister lauded the efforts of the former Finance Minister, Dr. Abdul Hafeez Shaikh for managing the country’s economic and financial affairs despite challenges.He expressed the hope that the launching and implementations of the Corporate governance rules 2013 for PSCs would help improve the performance of the public sector entities and benefit the country.Meanwhile, speaking on the occasion, Chairman Securities and Exchange Commission of Pakistan Muhammad Ali gave detailed presentation on the Corporate Governance Rules 2013 and expressed the hope that the rules will have far-reaching effect in reviving the PSCs in Pakistan.He said that these rules have been formulated in view of the distinct governance challenges faced by the public sector companies in Pakistan.

According to official estimates, the eight major PSCs are receiving more than Rs300 billion in annual support and bailouts from the federal government, thereby draining fiscal resources which may otherwise be used for improving public services.He said that the rules would go a long way in defining the overall objectives of state ownership, avoiding day-to-day interference in the management of PSCs, granting operational autonomy to the board of directors (BODs), centralizing the ownership function through a coordinating entity, and exercising ownership rights according to the legal structure of each PSE, including respecting the rights and interests of minority shareholders in case of partially owned PSCs.

With regard to board empowerment, the Rules have laid down the requirements that the BOD shall comprise of at least 40% independent directors while with regard to transparency, the rules have laid down specific requirements pertaining to corporate, financial reporting and accounting framework. All PSCs are required to adopt International Financial Reporting Standards (IFRS) and the Directors’ report to the members shall also include detailed disclosures specific to the PSC operations based on its social mandate.Moving to the third key aspect, accountability, the Rules lay down specific requirements with regard to creation of the BOD’s audit committee, internal and external audit for all PSCs.

Further, the Rules also lay down criteria for the appointment and removal of the Chief Internal Auditor as well as separating the position of the Chairman and CEO to achieve an appropriate balance of power, increasing accountability and improving the BOD’s capacity for decision making, independent of management.Director General (ERU) Finance Division, Dr. Khaqan Hassan Najeeb said that the formation of these rules was a difficult and lauded the efforts of the task force that put on its untiring efforts to make this possible.

Delivering the inaugural address, Country Director CIPE, Moin Fudda also highlighted the salient features of the rules.Representatives of World Bank and Asian Development Bank were also present on the occasion who observed that PSCs wer eating up budget but were not providing service and expressed the hope that new rules would help improve the overall situation.We will leave roadmap for the next government to get rid of circular debt and make other state owned entities effective. – PT