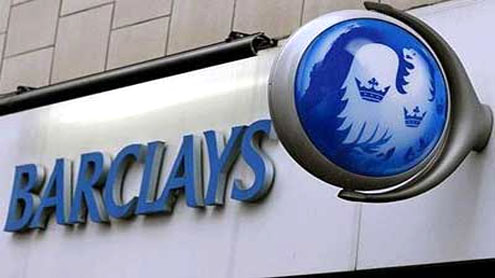 LONDON: British bank Barclays, which was rocked by a rate-rigging scandal earlier this year, said on Wednesday it fell into a nine-month net loss as it took a vast charge on the value of its own debt.

Barclays, which also took a large provision for insurance mis-selling, said in a results statement that losses after taxation stood at £200 million ($321 million, 248 million euros) in the nine months to September.That compared with £2.7 billion last time around.The bank had already flagged two weeks ago that it would take a £1.01-billion charge on the rising value of its own debt.

The group, which suffered a boardroom shake-up after the Libor interest rate-rigging scandal, had also announced it would set aside another £700 million ($1.13 billion, 862 million euros) to compensate clients mis-sold insurance.Barclays added however that adjusted pre-tax third-quarter profits before exceptional items rallied 29 percent to £1.727 billion, boosted by its investment banking division. That was in line with the company’s own guidance.

“These results demonstrate that we continue to have good momentum in our businesses despite the difficulties we faced through this period,” said chief executive Antony Jenkins in the earnings release.”While we have much to do to restore trust among stakeholders, our universal banking franchise remains strong and well positioned.”

The bank also revealed that the US Department of Justice and Securities and Exchange Commission were “undertaking an investigation into whether the group’s relationships with third parties who assist Barclays to win or retain business are compliant with the United States Foreign Corrupt Practices Act.”It added that it would “fully” cooperate with authorities.

Barclays added that the US Federal Energy Regulatory Commission’s Office of Enforcement has been investigating Barclays power trading in the western US with respect to the period from late 2006 through 2008.The bank said that it would “vigorously defend” this matter.The Libor scandal had erupted back in June, when Barclays was fined £290 million by British and US regulators for attempted manipulation of European interbank rates between 2005 and 2009.

The affair led to the resignations of three Barclays senior board members, including chief executive Bob Diamond. He was replaced by Jenkins, who was formerly head of retail and business banking.Barclays will meanwhile stand trial over its manipulation of a key lending rate after a High Court judge ruled in London on Monday that a care-home company could sue for the alleged mis-selling of financial products. – Brecorder