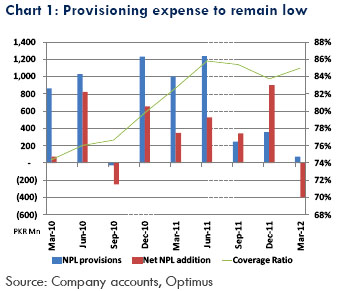 Net interest income remains under contraction: MCB topline saw a decline of 8% in 1qCy12 as asset repricing was being done on lower yields. We expect further contraction in NIM as gradual asset repricing continues in 2qCy12. Meanwhile, deposit cost of the bank will also increase as minimum profit rates on saving accounts are increased from 5% to 6% effective 1st May-12 (CASA at 81% as of 1qCy12). We aniticipate a negative PKR 1.18 annual EPS impact for MCB from 1% increase in minimum profit rate on savings accounts.

Outlook: MCB’s top-line is likely to remain under pressure as another interest rate cut can result in further NIM attrition. We expect the bank to further push for current accounts in CASA mix along with finding new avenues to increase fee income which they have done in 1qCy12 (Fee income was up 16.3% Y/Y and 13% Q/Q).

About the Company
MCB Bank Limited (MCB) is a commercial banking company incorporated in Pakistan operating with 1,165 branches in Pakistan including 22 Islamic banking branches. As at December 31, 2011 the bank maintained net advances of PKR 230bn and held PKR 512bn worth of deposits.

Disclaimer
This report has been prepared by Optimus Capital Management (Pvt.) Ltd. [Optimus] and is provided for information purposes only. Under no circumstances, this is to be used or considered as an offer to sell or solicitation or any offer to buy. While reasonable care has been taken to ensure that the information contained in this report is not untrue or misleading at the time of its publication, Optimus makes no representation as to its accuracy or completeness and it should not be relied upon as such. From time to time, Optimus and/or any of its officers or directors may, as permitted by applicable laws, have a position, or otherwise be interested in any transaction, in any securities directly or indirectly subject of this report. Optimus as a firm may have business relationships, including investment banking relationships with the companies referred to in this report. This report is provided only for the information of professional advisers who are expected to make their own investment decisions without undue reliance on this report and Optimus accepts no responsibility whatsoever for any direct or indirect consequential loss arising from any use of this report or its contents. This report may not be reproduced, distributed or published by any recipient for any purpose.