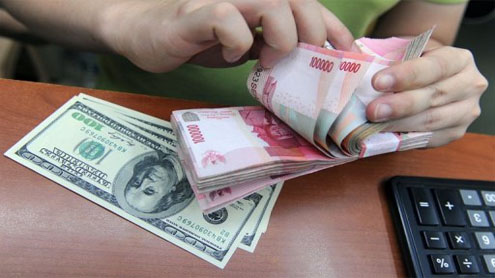 JAKARTA: Indonesia’s sizzling economy is starting to cool and show dents in its resilience to a global slowdown, putting pressure on its rupiah currency and leaving policymakers little room to further cut record low interest rates.

Southeast Asia’s largest economy is expected to announce second quarter GDP growth of 6.1 percent on Monday, according to a Reuters poll of economists. The number is respectable but is the slowest in nearly two years, as an exports slump is likely to outweigh buoyant consumer demand and investment.The region has become a safe haven for investors seeking high returns given market turmoil elsewhere, but the softer data will show that a prolonged global downturn is finally catching up with a country where domestic demand is over half of GDP.

A 16 percent drop in June exports, the biggest in nearly three years, left a record trade deficit, underlining concerns over the Indonesian rupiah, already the second worst performing emerging Asian currency this year.“Financing the deficit may not be an issue in more normal times,” said Chua Hak Bin, economist at Bank of America Merrill Lynch in Singapore.

“But if global financial conditions freeze up, say because of a turn of events in Europe, the Indonesia rupiah will be vulnerable.”The currency has fallen 4.4 percent this year to 9,460 per U.S. dollar, and Bank of America Merrill Lynch sees it weakening sharply to 9,700 in the third quarter. Morgan Stanley has cut its outlook for Jakarta stocks to neutral because of volatility in a currency it sees falling to 10,000 per dollar this quarter.

The central bank has lowered its 2012 growth forecast to 6.2 percent from 6.5 percent previously, though that is still at the higher end of market forecasts. GDP grew 6.3 percent in the first quarter and 6.5 percent in 2011, the fastest for 15 years.Indonesia is the first country in Southeast Asia to release final GDP figures and the moderating growth picture is expected to be similar across the region. Still, investors are pouring into its stock markets, with bourses in Manila, Ho Chi Minh, Bangkok and Singapore all seeing double-digit rises this year.Investors are betting on long-term growth. IHS Global Insight forecasts the region’s GDP will overtake Japan by 2028.

Rating agencies have lifted Indonesia to an investment grade, on a par with BRIC member India, and foreign direct investment surged 30 percent between April and June to tap the country’s resources and growing middle class consumers.Consumption: Yet an burgeoning appetite for imports, from wheat for fast food to iPads and luxury cars, in a country that mostly exports raw commodities such as coal and crude palm oil, created a $1.3 billion trade deficit in June – a deficit that economists see continuing to the end of the year.“A deficit turns a currency into a VIX currency – it underperforms other currencies against the U.S. dollar when sentiment shifts to risk off,” said Tim Condon, economist at ING, referring to the widely used volatility index VIX.

The weak rupiah will make it harder for the central bank to cut interest rates again, particularly as inflation picked up last month because of higher food prices ahead of festivities at the end of the Muslim Ramadan period, economists say.Bank Indonesia, which holds its next policy meeting on Thursday, has left interest rates at a record low 5.75 percent for five months after slashing rates by 100 basis points between October and February to prop up the domestic economy.

In recent months, most analysts have expected the central bank to stay on hold all year, though the worse-than-expected external conditions and export slump means some are now suggesting it may be pushed into considering another rate cut.“My thinking is that BI will want to pre-empt the global slowdown by cutting the policy rate,” said Condon, calling for a rate cut this month or next. “No Asian market will be spared selling pressure if growth expectations get revised significantly lower.” – Dailytimes