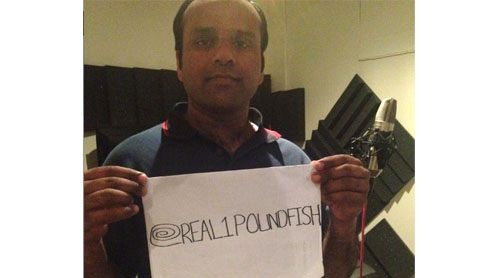 A new singing sensation has risen on the horizon, instantly causing a stir on the Internet with a song that is set to determine a new career path for the humble singer.

Shahid Nazir Ahmad, who came as a student to London a year ago, is not an established singer and never dreamed of becoming one. He never imagined that he will one day count former pop sensation Alesha Dixon as a fan as well as more than three million members of the public who have watched his sensational song ‘One Pound Fish Man’ on YouTube, propelling the hardworking student into the mainstream music scene.Working in minorities-dominated East Ham’s fish market, the Lahori student made his song to attract potential customers to the discount-rate fish. It is clear that Ahmad took his inspiration for the song from street-hawkers and stall-sellers occupying the busy streets of inner Lahore and other urban shopping areas.

The standout version has to be the one done by singer turned TV superstar Alesha Dixon, now a judge on the popular X Factor. Alesha Dixon has done a cover version of the song on the BBC 1Xtra Breakfast Show. But that’s a small thing as compared to what else the budding singer has achieved. After clearing three rounds of auditions, the singer has already recorded his song for the X Factor, likely to be shown in the second week of August. A pirate video of Shahid’s X Factor audition is out, showing the house warming up to his lyrics.

Gushes the student: “X Factor is the world’s largest music stage at the moment with millions tuning in every week. I cannot believe how lucky I have been to be part of this show.”The part-time worker found a job at the fish market three months ago. “On the first day I just did a little bit of shouting to attract customers, shouting ‘one pound fish’, and then on the second and third day I made up this ‘One Pound Fish’ song myself, not really expecting anything. When I started singing everyone liked it. You can say that the first impression is the last impression because everyone said they liked it and appreciated my voice,” explained Shahid, while speaking to Instep Today.  –  Thenews