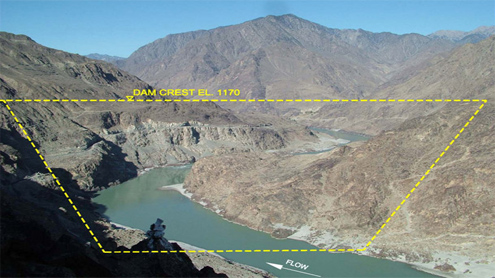 With a storage capacity of about 8 million acres feet (MAF) and projected electricity generation of 4,500 MW, Diamer Basha would top both Tarbela and Mangla dams, whose storage capacities have fallen drastically due to silting over the years, while the federal government claimed that the said project would take eight years to complete.  The federal minister for Kashmir affairs and Gilgit Baltistan (GB) called on Prime Minister Raja Perez Ashraf at the PM House, where he briefed about the affairs of Kashmir and GB particularly energy projects.  Raja directed the minister for Kashmir affairs to expedite work on Diamer Bhasha project as it was of national importance, adding the government has approved Rs 41 billion as compensation for the affectees of this project.

Former prime minister Yousaf Raza Gilani had inaugurated 4,500 MW Diamer Bhasha Dam on October 2011. The Diamer Bhasha Dam will be the lifeline for the country’s economy, while approximately 22,000 people in 30 villages are likely to be displaced due to the dam. The project will take eight years to complete and will cost over $12 billion. In addition to the Rs 11.5 billion already allocated for the project, however an additional Rs 1 billion has been allocated for repair and expansion of Karakoram Highway and other roads in the region.  The resettlement of 24,350 people is underway and people of the project site have received more than 50 percent payment of compensation by the federal government, however if the project won’t stop then 1,600 acres agriculture land in GB region could be barren and 2,833 household families could lose their earning source.

The Water and Power Development Authority (WAPDA) had exchanged Memorandum of Understanding (MoU) with the Asian Development Bank (ADB) on December 13, 2011 on Diamer Bhasha Dam, which was a major development for the project. The ADB has also agreed to become the financial adviser for the dam, which augurs well for the hydropower mega project.  The dam’s capacity of 8 MAF water and power generation capacity of 4,500 MW would help bring industrial and agriculture revolution in the country besides creating tens of thousands of job opportunities and project would recover the entire cost within seven years.

The project would produce electricity worth $2 billion annually besides sufficient water storage capacity for the agriculture to irrigate 2 million acres of land in the country. It is easy to imagine the boost the agriculture sector would get when two million acres of land would start giving yield and its consequential staggering social impact.  It would also increase the life of Tarbela Dam for another 35 years because the downstream silting would be reduced to a considerable extent.  An official said that during the past 10 years water reservoirs stood at an average of 3.5 MAF, which resulted into less power generation and less water for the agriculture sector, affecting the agriculture and industrial production.