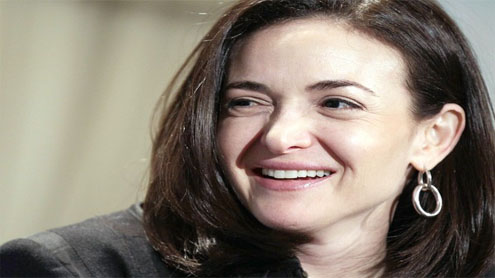 NEW YORK: Facebook’s No. 2 executive, Sheryl Sandberg, has become the first woman on the social-networking company’s board of directors.

Sandberg was lured from Google in 2008 to become Facebook’s chief operating officer. Besides being the first woman, she is the first executive other than founder and CEO Mark Zuckerberg on the board.People had called for the company to add women to its board ahead of its initial public offering of stock in mid-May.In announcing the move Monday, Facebook Inc. didn’t say whether that came in response to calls to add women. But as the No. 2 to Zuckerberg, she was a logical choice.

“Sheryl has been my partner in running Facebook and has been central to our growth and success over the years,” Zuckerberg said in a statement. “Her understanding of our mission and long-term opportunity, and her experience both at Facebook and on public company boards makes her a natural fit for our board.”Sandberg has been largely responsible for building Facebook’s advertising business. She’s also often serves as Facebook’s public face, appearing at conferences and important meetings, while Zuckerberg often prefers to stay in the background and focus on Facebook’s products.

Sandberg’s appointment is somewhat symbolic. She is already a highly influential executive at Facebook that’s unlikely to change with her board appointment. That said, Zuckerberg still controls Facebook and its board through more than half of its voting stock, which also won’t change with Sandberg’s appointment.Sandberg, 42, joins Zuckerberg, Netflix chief Reed Hastings and entrepreneurs Marc Andreessen, James Breyer and Peter Thiel. Also on the board are Donald Graham, CEO of The Washington Post Co., and Erskine Bowles, president emeritus of the University of North Carolina system.

Sandberg also serves on the boards of The Walt Disney Co. and of groups such as Women for Women International. She won’t receive any additional financial compensation for the board role.Ultraviolet, a group that has been asking Facebook to add women to its board, said its campaign “should have never been necessary.”“We hope this is a first step for Facebook and in the coming months more women will be added to their board,” co-founder Nita Chaudhary said in a statement. “In addition, we hope that other companies with all-male boards, particularly those in the tech sector, will follow Facebook’s lead.”

Most large corporations have at least one female board member, but that’s where it ends for many of them. According to a report on corporate board gender diversity from corporate advisory firm Glass Lewis, 91 percent of companies in the S&P 500 had at least one female board member in 2011.That said, only women held only 16.1 percent of board seats at Fortune 500 companies last year, according to a report from Catalyst, a non-profit group that advocates for women in business.Companies in the energy and technology sectors had the lowest levels of female board representation, the Glass Lewis report found. – WP