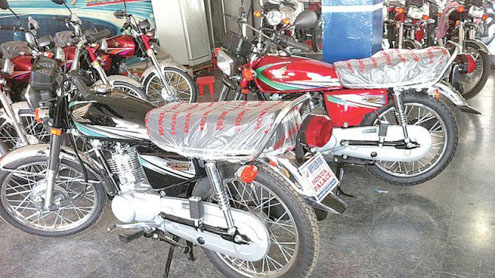 KARACHI: The government will support the manufacturers through prudent policies and encourage them to enhance the capacity and transfers of technology which will not only benefit local consumers but also increase exports of ‘Made in Pakistan’ motorcycles, said Chairman Federal Board of Revenue (FBR), Mumtaz Haider Rizvi.

While inaugurating Atlas Honda motorcycle’s production capacity enhancement to 0.75 million bikes a year alongwith Kenji Kawaguchi, President Honda R&D Southeast Asia, he said he was looking forward to Atlas Honda’s next landmark of achieving production and sales targets of 1 million motorcycles a year, as it would be a direct support to achieve FBR’s revenue collection targets. He asked the visiting officials of Honda Japan to take another leap forward and plan for producing 2 million motorcycles not only for local market but to tap the regional markets as well.

Pakistan is the country of 180 million people which could be considered amongst the biggest markets of motorcycles while it has immaculate and talented workforce besides a thriving economy which is a most suitable recipe for planning further investments. Atlas Honda’s plant enhancement capacity has been increased from 600,000 units to 750,000 units a year with the investment of $35 million.  This unit is not only to save valuable foreign exchange by deleting 94 percent of the motorcycle parts but also to earn foreign exchange through exports, he said. Kenji Kawaguchi assured consistent policies from the government and continuous support from FBR would encourage Honda Japan to increase its role in Pakistani motorcycle market’s development.

“I am expecting from Honda to introduce several new and improved models in the coming years in order to serve better the Pakistani customers”.  Chief Executive Atlas Honda, Saquib Shirazi announced the company would now be undertaking a feasibility study for an expansion project to increase annual production of motorcycles to 1 million units, which was estimated to cost around an additional $50 millio.  Besides having 94 percent localisation of our brands, our exports have doubled this year to around 20,000 units, while we are hopeful to achieve our export target of 100,000 units in next three to five years, he added.
-Dailytimes