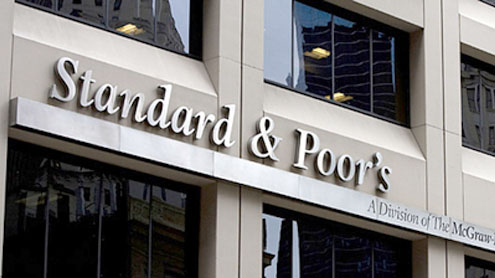 NEW YORK: Standard & Poor’s reduced its credit ratings on 15 big banking companies, mostly in the Europe and United States, on Tuesday as the result of a sweeping overhaul of its ratings criteria.

JPMorgan Chase & Co, Bank of America Corp, Citigroup Inc, Wells Fargo & Co, Goldman Sachs Group Inc, Morgan Stanley, Barclays Plc, HSBC Holdings Plc and UBS AG, were among the banks that had their ratings reduced by one notch each. A notch is one third of a letter rating.S&P also left the ratings of 20 banks as they were and raised the ratings of two in announcing results from its new ratings criteria to 37 of the world’s biggest banking companies. The agency also updated ratings for dozens of bank subsidiaries of the companies.Although S&P began warning the markets more than a year ago that it was revising its ratings, the announcement comes at a time when the markets for bank debts are fragile.

“Banks could see higher funding costs,” said Guy LeBas, chief fixed income strategist at Janney Montgomery Scott in Philadelphia.S&P officials said earlier this month they would gradually roll out the updated ratings for more than 750 banking companies worldwide, starting with an announcement about the biggest banks. The remaining announcements are due in coming weeks.The outcome of the re-rating of the biggest banks was worse than S&P has forecast for all banks. S&P officials said earlier this month they expected about 20 percent of all banks would see their ratings drop, while 20 percent would get higher ratings and 60 percent would stay the same.

Spokespersons for Bank of America, JPMorgan, Goldman Sachs, Morgan Stanley declined to comment.S&P’s overhaul is part of a broad, multi-year drive by the agency to improve its products and repair its reputation, which was badly tarnished by having wrongly put triple-A ratings on securities backed by subprime mortgages. The agency is owned by McGraw-Hill Companies Inc.In response to growing pressure on their credit ratings, some banks have updated contingency plans for a downgrade. They have also refreshed disclosures on the potential impact they may suffer through ratings triggers built into obligations under existing derivatives contracts, funding commitments and borrowing arrangements. – Brecorder