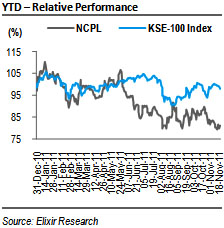 Lower than expected depreciation expense during 1Q: Depreciation for 1Q was expensed at PKR233mn, 26% lower than our expectation. Annualized depreciation rate for 1Q charge was 1.7pp lower than FY11’s annual rate of 7.3% owing to lower utilization during the quarter.

BUY maintained: NCPL is currently trading at FY12 PER of 2.7x and offers a dividend yield of 29%. The scrip currently offers a healthy upside of 54% to our Jun-12 PT of PKR20/share and a real USD IRR of 19% over the remaining term of the Power Purchase Agreement. BUY! Net spread income (markup income on over dues less ST borrowing cost) during 1QFY12 is estimated at PKR77mn (PKR0.21/share), up 32% QoQ as overdue receivables increased by PKR3.6bn during 1QFY12, 56% of which was funded by ST borrowings.

The State Bank of Pakistan (SBP) statistics showed a growth of 187% in the deficit value compared with previous year’s period figures, standing at USD541mn. The current account deficit has swelled to USD1.56bn in 4MFY12.