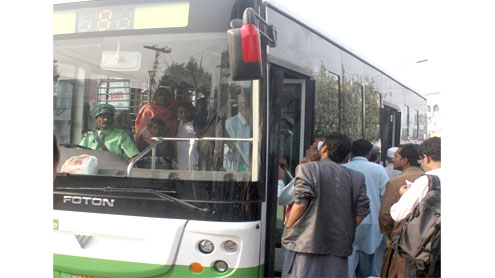 LAHORE: The newly launched CNG buses could not start their operations on the routes even on Thursday due to the protest by the drivers and students against the government for different reasons.

The citizens also criticised the idea of launching CNG buses at the time when the country was facing extreme gas shortage and closure for three days a week.The students were of the view that the current government was reversing the development that country had seen during the times of Bhutto who had promised to provide basic facilities to the people and delivered on the promise to some extent.

They said that the government was privatising their departments and had handed over the business of public transport to their favourites, who were only thinking about their profits like capitalist businessmen.They strongly criticised the idea of not running these buses, from 7am to 9am and from 12pm to 3pm merely to stop the students from boarding these new busses, keeping in view the notion that students would try to travel for free on these buses.

The other reason why the buses could not run on Thursday was the protest by the drivers, who said were not informed by the company that they will be liable to pay for the challans and damages to the bus in case of accident.The drivers refused and complained that the government never told them about these terms and conditions. They said it was not possible for them to pay the damages in a city where accidents and challans are part and parcel of their work.

Meanwhile,the Lahore Transport Company ( LTC )stated that it had started four buses each on three different routes out of the total 56 buses and were supposed to be launched on the roads of Lahore. They said that they have also observed the five hours a daybreak to avoid hassle with the students.LTC chairman Khawaja Hassan told the media that there was only mere delay in running the buses due to the maltreatment of students with the bus staffers but there will be a smooth operation from today onwards. – Dailytimes