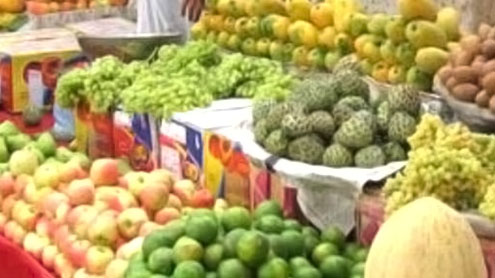 India could become a large market for Pakistani fruits and vegetables in a free trade environment and exports of these commodities could fetch three billion dollars in next five years, trade experts said.

“There is need that we focus on free trade of fruits, vegetables and other farm products to enhance their exports,” Chief Executive Officer Harvest Tradings, Ahmad Jawad said.He said Pakistani agricultural traders had suggested that fruits and vegetables should not be included in the negative list being prepared in relation to trade with India instead, value added products including mango pulp could be put in the list.Jawad was of the view that Pakistan could substantially increase the volume and value of fruit and vegetable exports after gaining access to the Indian market and diverting focus from high-value markets of Europe and America.

In the case of latter, heavy investment was required to acquire international standard and quality certification necessary for exports, he pointed out.”India could be a big importer of Pakistani kinnow and mango,” Ahmad Jawad told newsmen here on Wednesday.He said that production of kinnow was estimated to be around two million tons this year, of which 300,000 tons could be exported, adding kinnow exports could be increased further in case of trade with India.

Similarly, he suggested that India and Pakistan could jointly market mango in the international market for eight to nine months in a year because mango season in India started in March and continued till June while the season in Pakistan began in June and lasts till October.For the upcoming season, starting next month, there were encouraging reports of kinnow production ranging around 2.5 million metric tones, he said, adding there was a strong prospect that country’s exports would surpass previous years figure.He claimed that the national exchequer would earn up to dollars 200 million if the export target was met.

“In view of these advantages, the Indian and Pakistani governments should formulate comprehensive policies to improve trade,” he said.The CEO Harvest Tradings, however stressed the need for establishing an economic union along the lines of Europe.He stressed the need for making visa process easy adding that all the nations in the region should discuss how a single visa could enable a person to travel throughout the region. – Brecorder