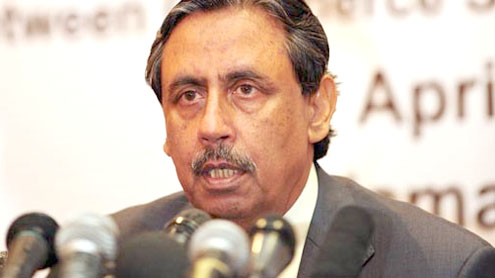 LAHORE:  The Federal Secretary Commerce Zafar Mehmood has made it clear to the business community that being a signatory of WTO, Pakistan is required to give same treatment to all WTO members which also include India.

So, we have no other choice except granting MNF status to India, he said.Zafar Mehmood said that trade between Pakistan and India is not normal as World Bank and other such global institutions have estimated that goods worth one billion to five billion dollars are being imported by Pakistan from India through third country.He said that India would have to dismantle all Non-Tariff Barriers (NTBs) to Pakistan’s satisfaction to get MFN status.“We have pleaded to our Indian counterparts to dismantle all NTBs first so that both the sides have a level playing field to do business with each other.”The Federal Secretary was speaking at the Lahore Chamber of Commerce and Industry Thursday.

Talking about the Negative List, the Federal Secretary said that the government was ready to put more items on this list, provided they are forwarded to the Ministry with a proper reasoning or logic for being on the Negative List. The Negative List with India is refreshed on yearly basis in the month of June, the Secretary said.He said that Indian goods would not be allowed to reach Afghanistan even after granting MFN status to India. He said that all decisions would be made keeping in view the national interests and for the purpose the Ministry had already initiated consultation process with all the Chambers and trade bodies.

The Federal Secretary informed the business community that Pakistan would get GSP Plus status from the European Union on January 1, 2014 as India has withdrawn its opposition or objections.LCCI President Irfan Qaiser Sheikh said that we are in favour of promotion of trade especially with our neighbouring countries because we believe that by enhancing the trade ties with our neighbours, we can succeed in bringing economic boost and reviving our industry.But we do not favour any agreement at the cost of industry which is currently making all out efforts to survive in the presence of acute energy crisis, rising inflation, widespread corruption and deteriorating law and order situation.

The LCCI President made it clear to the visiting Federal Secretary that a hurried decision on MFN status to India will deal a fatal blow to pharmaceutical, automobile, motorcycle, petro-chemical, auto parts, sugar, textiles, cooking oil/ghee industries. He said that any forward step without addressing the concerns and fears of private sector with regard to awarding MFN status to India will only result in causing more problems to the domestic industry and economy overall. – Nation