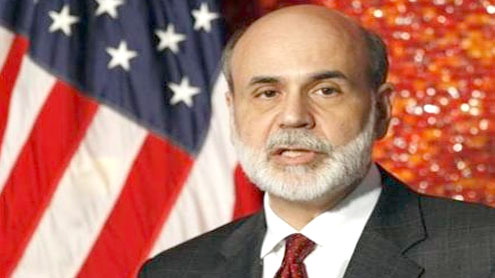 WASHINGTON: Federal Reserve Chairman Ben Bernanke on Wednesday will likely use his first-ever news conference on monetary policy to hammer home the case for a patient approach to withdrawing the central bank’s extensive support for the U.S. economy.Following a two-day Fed policy meeting, Bernanke will face the press in the first regularly scheduled news conference by a Fed chairman in the central bank’s 97-year history.He is expected to use the occasion to amplify the consensus view at the central bank that the economy still needs the Fed’s monetary policy support. That consensus has been challenged by a number of hawkish Fed officials who worry the U.S. central bank might wait too long to raise interest rates.The Fed is lagging other central banks in tightening financial conditions. The European Central Bank raised benchmark rates earlier this month, a move that helped the U.S. dollar hit a 16-month low against the euro on Tuesday.

In contrast, the Fed’s policy-setting Federal Open Market Committee, in a statement due at about 12:30 p.m. (1630 GMT), is expected to indicate it will pursue its $600 billion bond- buying program through to its scheduled conclusion at the end of June. It is also expected to reiterate that it will keep interest rates unusually low for “an extended period.”“The FOMC meeting will not break new ground in substance, but will provide Bernanke a new venue to demonstrate the doves are in control,” said Eric Green of TD Securities.The Fed statement will be overshadowed by Bernanke’s historic news conference at 2:15 p.m. (1815 GMT).Journalists are likely to press Bernanke to go beyond the central bank’s pithy statement to offer more insight on when and how the the Fed might begin to tighten policy.The Fed chopped benchmark short-term rates to near zero in December 2008 and then bought $1.4 trillion in longer-term mortgage-related debt and Treasury securities to pull the economy out of a deep recession.When the recovery flagged last year, the Fed launched its latest round of bond buying.

Fed officials known to voice consensus views — such as Vice Chair Janet Yellen and New York Fed President William Dudley — have defended the monetary support as important medicine for an economy with unemployment at 8.8 percent.While Bernanke is unlikely to offer any timeline for rate hikes, he might provide insights into the latest thinking at the Fed on how officials will go about tightening policy.Last year, he said the first step toward exiting would likely be a rate hike. However, recently some officials have urged that bonds be sold off first.The central bank’s statement is expected to suggest officials see the recovery on solid ground even though growth in the first quarter of the year was sluggish.At the same time, the Fed is expected to restate concerns over the high level of unemployment and reiterate that upward pressure on inflation from surging commodity prices should prove fleeting.This would give the Fed scope to continue to nurse the recovery with its easy monetary policy.“The baseline outlook for the Fed is that rates won’t be rising for a long time,” said Michael Gapen of Barclays Capital. “They just don’t want to precommit and reduce flexibility. – Khaleejnews