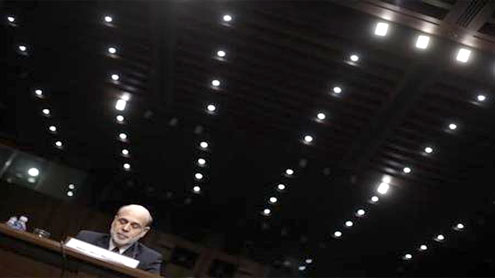 NEW YORK: Data on how the U.S. and British economies fared in the first three months of the year due next week will likely highlight the tenuous nature of the recovery from recession in developed countries.A combination of rising gasoline prices and bad weather has prompted a number of big banks to cut their forecasts for U.S. economic growth in the first quarter.The preliminary snapshot of U.S. GDP growth, which a Reuters survey puts at 2.0 percent, will be released on April 28.In the UK, where weak consumer demand is expected to weigh on first-quarter output, the preliminary reading will be released on Wednesday.”The GDP figures will probably zoom in the focus more closely on fundamentals. A disappointment in the UK and U.S. may temper some of the buoyancy behind commodity and equity prices,” said Lena Komileva, global head of G10 currency strategy at Brown Brothers Harriman in London.Many economists, including Federal Reserve Chairman Ben Bernanke, believe commodity price rises will prove temporary, and will thus have no lasting impact on inflation or growth.

But the most recent data suggests the U.S. economy won’t regain momentum soon. On Thursday, data showed factory activity in the Middle Atlantic states braked sharply in April.Slower U.S. growth coupled with persistently high unemployment suggests the Fed is in no hurry to raise interest rates, even as it is almost certain to end a $600 billion bond buying program in June as planned.Bernanke will get a chance to explain the Fed’s thinking when he faces the media April 27 for his first post-meeting press conference.”Communication is an extremely important tool for the Fed — now more than ever — to continue to manage down rate (hike) expectations at a time when it is too early for the economy to bear a rate hike,” Komileva said.Most analysts expect the Fed will hold support for the economy steady by maintaining the size of its balance sheet after June.The Bank of England faces more pressure than the Fed to reverse course, with inflation seen rising again, and analysts say the GDP data may be important in influencing the BoE’s decision on the timing of rate hikes.Like the Fed, the BoE has kept rates at a record low for more than two years. In contrast, the European Central Bank raised borrowing costs this month for the first time since July 2008.

Weak GDP data would strengthen the hand of those Bank of England members worried what raising interest rates would do for fragile demand.On the fiscal side, the UK is already undergoing strict austerity measures and may offer a preview of what lies in store for the United States when it starts to tighten its belt.”The UK data is probably a little more due to fiscal austerity. That’s something the U.S. ought to contend with next year, and the UK is contending with now,” said Michael Feroli, U.S. economist at JPMorgan.Standard & Poor’s on Monday threatened to downgrade the United States’ prized triple-A credit rating unless the Obama administration and Congress find a way to slash the yawning federal budget deficit within two years.President Barack Obama on Wednesday warned that if the U.S. slashes spending too deeply, it could face a second recession.”If all we are doing is spending cuts, and we are not discriminating about it, if we are using a machete instead of a scalpel, and we are cutting out things that create jobs, then the deficit could actually get worse because we could slip back into another recession,” he said.Complicating things further, the United States won’t learn the full impact on its economy from last month’s catastrophic earthquake and tsunami until the second quarter is well under way.Feroli said the impact could be “pretty significant.”Japan, though, will get its first post-earthquake look at some important indicators, including inflation, household spending and industrial production.The Bank of Japan is also set to provide an update of its growth and inflation forecasts. – Reuters