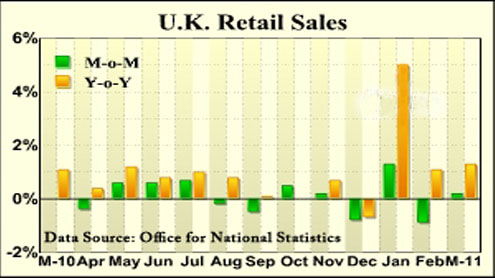 Retail sales in the UK registered a surprise pick-up in March, led by strong food and non-store sales.Sales volumes rose 0.2% compared with a month earlier, according to the Office for National Statistics (ONS).Market analysts had expected a much weaker number after a downbeat survey was released by the British Retail Consortium (BRC) last week.It follows a revised 0.9% drop in sales in February – a fall that had also caught analysts by surprise.The ONS said in its latest retail sales bulletin that the volume of sales was up 1.3% compared with March 2010 on a seasonally adjusted basis – which takes account of the fact that Easter fell in March last year.Food stores saw their sales rebound 0.7% compared with February, which had been a very weak month for them, but remain 1% lower than a year ago.Non-store sales continued to register strong growth – up 0.6% against February, and up 13.1% versus a year earlier – in part reflecting the continuing shift of business online.

The ONS estimates that internet sales now comprise 9.8% of all non-fuel retail sales in the UK by value.”The ONS figures confirm a worrying downward trend for retail sales,” said BRC director general Stephen Robertson.”Annual growth in sales values is a quarter of what it was in January and the worst since April last year which was hit by the earlier Easter.”This April’s figures will be helped by Easter and the Royal Wedding. That’s welcome, but won’t change the fundamentally weak conditions The numbers caught markets by surprise – instead of a 0.2% rise, economists had expected a month-on-month fall in sales of 0.5%.Sterling jumped half a cent against the dollar after the data was released, as currency traders priced in a higher probability that the Bank of England will raise rates over the summer, and went on to hit a 16-month high of $1.657.In the minutes from its latest rate setting meeting in April, the Bank indicated that the strength of recovery in consumer spending was a key question for them.However, the retail price deflator – an important proxy for inflation included in the data release – slowed down to a 3.4% annual increase from 4% in February.

“The consumer is not quite as flat on his back as had been feared,” said Howard Archer, economist at IHS Global Insight.However, he pointed out that despite the modest pick-up in sales and slowdown in price rises in the month, consumers were still seeing their incomes squeezed by inflation and “the underlying impression remains that consumers are less able and willing to spend”.He also noted that consumer spending for the first quarter of the year as a whole had only risen 0.3% versus the previous three months, which did not bode well for the economy, as retail sales comprise 65% of all spending.Victoria Cadman, an economist at Investec, said: “These figures and those from the last couple of months are not really showing the retail sector as being a picture of health.”I suspect the Monetary Policy Committee will not see this as a sign that consumer demand is gathering pace.”Smaller shops were doing well – including those in London selling memorabilia for the royal wedding, Aileen Simkins from the ONS told the BBC.The ONS highlighted in its bulletin that small stores did much better than large stores.

This was particularly true of the food sector, where sales at smaller retailers were 2.5% higher than a year earlier, whereas supermarkets were down 4.1%.The trend was first apparent in January, and reverses years in which sales growth at big stores has been outstripping that at smaller ones.”There is some talk that the high cost of petrol is leading some people to cut back on driving to the out of town shopping centres and supermarkets and do more shopping locally,” said Mr Archer.The ONS’ Aileen Simkins also noted that good weather in March helped sales of items such as climbing frames, as people prepared for a long summer.Other sectors showing strong growth were garden stores and toy stores, while IT stores were also doing well on the back of new product launches, she said.The ONS figures come after supermarket giant Tesco revealed earlier this week a 0.7% drop in UK like-for-like sales in the three months to 26 February.Meanwhile Home Retail Group reported shrinking markets for its Argos and Homebase chains, and predicted another tough year in 2011. – BBC