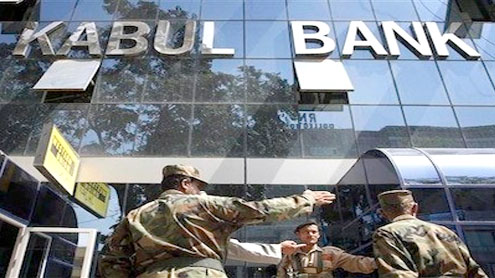 Afghanistan: Afghanistan has stepped up efforts to recover hundreds of millions of dollars in fraudulent loans made by the embattled Kabul Bank, but so far just 5 percent of the $909 million being sought has been recouped, the nation’s top banker said Wednesday.Afghan officials have been under heavy international pressure to resolve the problems at Kabul Bank, the nation’s largest private financial institution, which nearly collapsed last year because of mismanagement and questionable lending practices. Its shareholders once included the brother of President Hamid Karzai.The bank — now under the control of Afghanistan’s central bank — became a symbol of the country’s cronyism and deep-rooted corruption and is now considered a bellwether on attempts to root out patronage and show accountability to world financial institutions, such as the International Monetary Fund.”We are very serious,” said Central Bank Governor Abdul Qadir Fitrat. “The government is very serious.”The USAID inspector general said in a recent report that it is estimated that “fraudulent loans were used to divert $850 million to insiders.”

Fitrat, however, said investigators have determined that Kabul Bank made $579 million in loans — including questionable ones to the bank’s shareholders and others. Adding tax and interest from the six years the bank has been opened, the amount of the loans is estimated at $909 million, he said.Of that, $47 million in loans — or about 5 percent — have been repaid since September when the central bank took control of Kabul Bank, Fitrat told reporters. But he noted that the central bank and government officials now have more muscle to chase the money.”If somebody doesn’t cooperate, we will take action,” he said. “We will seize their property by the order of the court. Even we are ready to confiscate their properties if they do not cooperate.”The bank, which plays a key role in the Afghan economy by handling payrolls for government workers and security forces, has close ties to Afghanistan’s ruling elite. The former bank chairman, Sherkhan Farnood, a world-class poker player who raised money for President Hamid Karzai’s re-election campaign, owned 28 percent. A brother of one of Afghanistan’s two vice presidents was once a shareholder, and Karzai’s eldest brother, Mahmood Karzai, had owned 7 percent.

Besides buying property in Dubai, United Arab Emirates, the shareholders of Kabul Bank took out loans to heavily invest in an airline, fuel and gas companies and two shopping malls in Kabul, Fitrat said.He said 19 cases of fraud and questionable lending have been referred to Afghan prosecutors for investigation and two large corruption cases have been sent to the High Office of Oversight, an independent anti-corruption commission set up by the government. A separate probe has been opened by the Afghan attorney general’s office.The bank, meanwhile, has been split into a “good bank” — now under the Afghan Finance Ministry — and “bad bank.”Fitrat’s news conference comes just days after top Afghan finance officials discussed the bank on the sidelines of the spring meeting of the International Monetary Fund and World Bank in Washington. The bank scandal weakened confidence in Afghanistan’s financial system and has prevented the IMF from completing a new program for the country.Britain’s Department for International Development said it would delay nearly $138 million in aid to Afghanistan this year because of the lack of IMF support.”Kabul Bank was one of the issues raised by IMF,” Fitrat said. “Hopefully, with the announcement of the receivership of Kabul Bank and some other steps we have taken, the way will be paved for the signing of the IMF agreement.”An IMF spokesman said the fund’s staff had talks with Afghan authorities on the plan to address issues at Kabul Bank and strengthen the Afghan banking system. Preliminary understandings were reached on most issues, but talks will continue on specific steps linked to some measures, the IMF spokesman said – Yahoonews