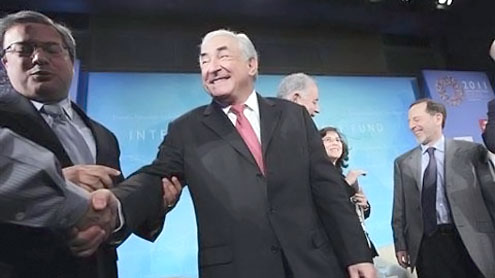 Activists in the Middle East and North Africa say a lack of opportunities and high unemployment rates, especially among the young, contributed to the tensions that erupted into popular uprisings across the region. Economists say they must look beyond spreadsheets if they want to provide the types of support that will improve the lives of individuals on the streets.Late last year, a 26-year-old fruit vendor in Tunisia set himself on fire, hoping to highlight the indignities average people endured in order to work.Mohammed Bouazizi’s self-immolation is credited with triggering a popular uprising in his country that has since spread to other countries in North Africa and the Middle East.Despite his university degree, Bouazizi could only find work as a street vendor, trying to earn a living as police stole his fruit or prevented him from selling his goods.

Mustapha Nabli, the Central Bank governor in Tunisia, addressed the issue of economic disparity when he spoke Friday on a panel at the International Monetary Fund headquarters in Washington.Nabli said he believes the uprisings in Tunisia, Egypt and elsewhere did not ultimately stem from inequality.”I think it’s really about fairness. The revolutions took place because people felt that what was happening was unfair and lots of things [that] were happening were unfair. It was not inequality, per se, which was a problem. It was the way people were acquiring wealth, accumulating wealth which was felt to be unfair.”Fellow panelist Rashid Khalidi, a professor of Arab Studies at Columbia University in New York, said governments and the international system alike are at fault for fostering unfair economic realities.”Obviously the elites of these countries are primarily responsible, but they were enabled and encouraged and reinforced not just by external support for repression, but by ideological support for the policies that they were following, and by a blind eye to things like corruption, by a blind eye to things like the fact that a larger and larger share of national income was going to a narrower and narrower stratum, and that’s not productive,” said Khalidi.

The IMF’s managing director, Dominique Strauss Kahn, said countries such as Tunisia and Egypt have fairly healthy macroeconomic figures. But, Strauss Kahn said, the distribution of income and high levels of youth unemployment showed that the population at large was not reaping the economic benefits.  “The international community needs to link more what is traditionally seen as important – economic, financial – and what is the really important thing in life – which is the people on the street,” he said.Strauss Kahn said economic experts must take into account real life if they want to help foster inclusive growth.

Egyptian pro-democracy activist Wael Ghonim agreed that the reality on the street is different than the reality presented in economists’ spreadsheets. “When we read the consumer reports that say that the inflation is about 10 percent, and then I find I’m talking to my neighbor, who tells me that the price of meat is 50% higher, who am I going to believe?”Ghonim also acknowledged that he is among the fortunate, as he holds an executive post at Google. He added that he believes Egyptian people do not want aid, but rather investment and technical expertise in order to create new, meaningful jobs that will enhance society.”Is job creation that we’re referring to a guy making $100 for a firm that makes billions of dollars as part of profits for very few people? I think the world now got sort of like a wake-up call.”Nabli, of Tunisia’s Central Bank, said people are going to be disappointed in the short term, as quality jobs are going to take time to materialize, even though the people want them now. – Voanews