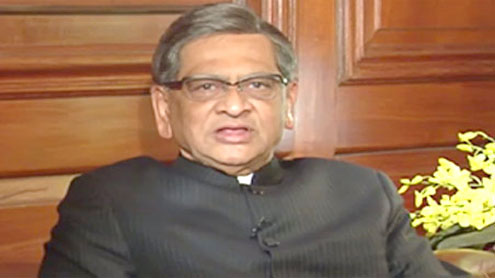 NEW DELHI: In a fresh friendly gesture to Pakistan, India has decided to resume the bilateral cricket series which was put on hold in retaliation against the 26/11 terror attack on Mumbai.The decision was announced by foreign minister SM Krishna here on Wednesday, strengthening the growing estimate, including in the country’s security establishment, that Pakistan may have been fully reprieved over 26/11.Notably, the announcement came just after the disclosure that Tahawwur Hussain Rana, a Pakistani expatriate who along with David Coleman Headley did the recce for the mass slaughter in Mumbai, had told a US court that he was acting at the instance of the Pakistani government and ISI.Questioned about Rana’s admission, Krishna said, “Peace talks will go on, cricket matches will go on and simultaneously, our relentless efforts will continue to bring to justice all those responsible for the heinous crime against India in Mumbai.”

The foreign minister said India would take up Rana’s statements with the Pakistani government. “There are no contradictions in that position,” he said when asked whether the revelations made by Rana would have an impact on India-Pakistan peace talks. “I have said that both these things will have to go on… Just look at the Sharm el-Shaikh declaration,” he said.Pakistan has been shunned by cricket nations and has not received any team since March 2009 when the visiting Sri Lankan team was attacked by terrorists. Pakistan’s moves for the resumption of ties had so far not been successful. Besides the anger over 26/11 and suspicions about Islamabad’s intent to bring the masterminds to book, Team India’s concerns for their safety also came in the way.The situation has changed dramatically since Prime Minister Manmohan Singh agreed to resume the bilateral dialogue at Thimphu, de-linking the process with India’s grievance against Pakistan’s unhelpful attitude over 26/11.

The push for normalization of ties gathered momentum after Singh’s talks with his Pakistani counterpart Yousuf Raza Gilani at Mohali. As a matter of fact, the first indication of India’s readiness to restore cricketing ties came from foreign secretary Nirupama Rao. In an interview she gave after the talks at Mohali, Rao said India was open to the idea of sending M S Dhoni and his mates to Pakistan.For all the keenness of the government, resumption of the Indo-Pak series is not likely till March next year because of the busy cricketing calendar. That apart, any plan to send the Indian team across will also have to contend with the reservations of Indian players who don’t consider Pakistan to be a safe venue. As a matter of fact, the Sri Lankan squad that came precariously close to being wiped out had gone to Pakistan after the Indian team pulled out because of security concerns.Nothing illustrated the shift in government’s stand better than Krishna’s invoking the Sharm el-Sheikh statement.

It’s the first time the UPA government has invoked the 2009 joint statement signed by PM Manmohan Singh which was criticized in India to the extent that the government had to walk back from it. Singh was isolated within his own party and Parliament for the politically damaging reference to Balochistan, also part of the same joint statement. The foreign minister’s reference to the declaration underlined government’s willingness to delink dialogue and terrorism. “We are in constant touch with the Pakistan government through our diplomatic channels,” Krishna said in response to questions.In fact, India has not been able to maintain a steady policy on Pakistan. A year after the 2006 Mumbai blasts, India was back to talking with Pakistan. After its 2001 attack on the Indian Parliament and the year-long Operation Parakram, the earlier Vajpayee government was busy holding a summit in Islamabad to restart the composite dialogue process. In fact, when the next terror attack happens, which most security experts believe is inevitable, the government can claim a tough reprisal by merely cutting off all talks.

The 26/11 trial has not taken off within Pakistan. During last month’s home secretaries’ talks, Pakistan only agreed in principle to allow Indian officials to talk to the accused in Pakistan. No dates, or modalities have been agreed to by Pakistan. And in Lahore, Lashkar-e-Taiba chief Hafiz Saeed on Tuesday, trashed cricket diplomacy and reasserted jihad against India.Saeed continues to roam freely in Pakistan, making anti-India tirades, even as Pentagon’s Pacific Commander Gen Willard said LeT had become a global phenomenon. In a testimony to the US Congress, he said, “It has historically been focused on the Kashmir region, particularly in order to conduct attacks inside India. And it was responsible for the attack in Mumbai that we’re all very familiar with,” he said. “Unquestionably, they have spread their influence internationally, and they are no longer solely focused in South Asia and on India, although that continues to be their main training ground, and India continues to be their main target.”On Tuesday, Saeed made a rare public appearance in Islamabad — and trashed Indo-Pak cricket diplomacy while vowing for a “jihad” in J&K.”The stand taken by the Pakistan government for friendship with India is not acceptable to the Pakistani people under any circumstances,” said Saeed. – TOI