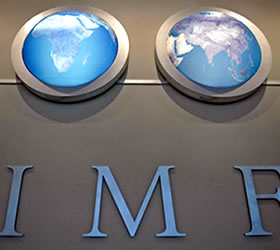 ISLAMABAD: Pakistan has submitted a new budget 2010-11 to the IMF staff maintaining its fiscal deficit of 4 percent of GDP of Rs 685 billion, says an IMF Staff Paper released on Wednesday. IMF staff report indicates a revised budget 2010-11 submitted by the Finance Ministry with defence budget increased by Rs 110 billion to Rs 552 billion.

Development spending have been slashed from Rs 663 billion to Rs 590 billion. “…the government will shift resources from non-priority current and development spending to relief and reconstruction spending,” says the report. The FBR tax revenue has been enhanced to Rs 1689 billion against Rs 1667 billion with visible increase in direct taxes from Rs 657 billion to Rs 736 billion and a reduction in indirect taxes from Rs 1007 billion to Rs 953 billion. “To boost budgetary resources, the government has decided to introduce a temporary 10 percent income tax surcharge, which could generate upto 0.4 percent of GDP,” says the Fund report.

Pakistan”s post flood crisis will lead to reduction in its GDP growth rate not more than 2.8 percent, inflation to surge to 13.5 percent and likely adjustment in discount rate on September 29 announcement, says the IMF recent detailed document released Wednesday.

“The IMF staff”s preliminary assessment is that, as a result of floods, real GDP growth is unlikely to exceed 2.3/4 percent and could be lower. Average annual inflation is projected to rise to 131/2 percent in 2010/11 compared to 11.7 percent in 2009/10 and the balance of payments is expected to weaken by $1.6 billion (0.8 percent of GDP) in 2010/11 compared to the pre-flood forecast,” says the IMF Staff Report.

An estimated Rs 2 trillion in T-bills needs to be rolled over this year and there may be higher domestic net financing needs of the government on account of floods. These considerations will have to be weighed carefully in deciding on the monetary policy stance in the coming months,” says the report.

Current account deficit was earlier estimated at $4.624 billion has now been enhanced to $5.861 billion. “(IMF) Staff expects floods will result in a weakening of the 2010/11 balance of payments by $1.6 billion (0.8 percent of GDP). The higher-than-expected trade deficit will be compensated in part by rising remittances, which may approach a record $10 billion. Even so, the current account deficit is likely to widen by 0.7 percent of GDP. Non Performing Loans (NPLs) are expected to rise especially for banks with large exposure to the agriculture sector.

“Initial estimates from the SBP put loan losses related to floods at about Rs 54 billion, of which Rs 34 billion are loans to agriculture. This will not materially dent the banking system as total private sector loans amount close to Rs 3 trillion, 3.1 percent of GDP,” says the report – Brecorder