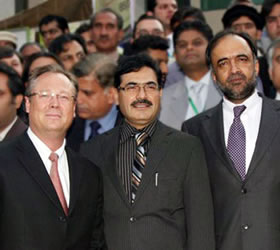 LAHORE : The PIAF-Founders Alliance on Tuesday made another clean sweep by winning all the eight seats of LCCI Associate Class for the year 2010-11 paving the way for the Alliance to have its President, Senior Vice President and Vice President. As many as total 1076 votes were polled out of 4279, while 40 votes were rejected due to technical reasons. PIAF-Founder Alliance got 696 panel votes, while the rivals Azad Group secured only 81 panel votes.

Election Commission comprising Sh. Salim Ali, Asim Qadri and Nadir Kamal Usman announced the provisional results. Soon after the announcement of panel vote results, the LCCI President Zafar Iqbal Chaudhry, Senior Vice President Ijaz A. Mumtaz and Vice President Faisal Iqbal Sheikh thanked the voters for reposing confidence in PIAF-Founders Alliance. They said that the number of votes cast in favour of the PIAF-Founders Alliance was enough to prove that the business community was with the Alliance.